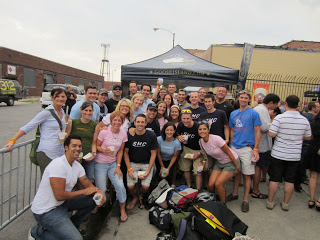 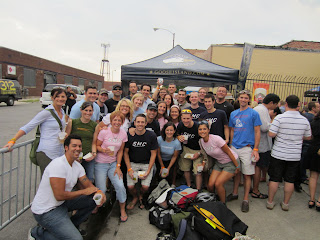 We’ve been doing a lot of riding…time to take a break and party! Lots of us showed up to the Harvest Ale Dock Party at Goose Island. I think we proved that Harvest Ale is really, really yummy! Thanks for having us Goose Island, we had a fantastic time! (proof here!)

The very next day, we were ready to party again! MS held a celebration for their huge success at the Tour de Farms this year. Spidermonkey’s helped and raised over $21,000, volunteered, and also had a hand in getting others involved in this great cause. We were honored to walk away with the “MOST VALUABLE TEAM” award! And we were thrilled to see our sponsor’s team Turner Acceptance walk away with “CORPORATE ROOKIE TEAM OF THE YEAR”. Thank you MS for letting us be a part of something so big and important, we can’t wait to do it all over again next year! Pictures here!

I believe we had a record number of Spidermonkey’s who showed up to the first cross race of the season…and not just to heckle but to race! Cross bikes, mountain bikes, beer, cookie crisp, jello shots, argyle socks…what’s not to love?? Stewart, Rebecca, Kelly, Kim, and Amy were all first timers…pretty sure the smile on their faces at the finish line means it won’t be their last! Great job everybody, thanks for making cross races so much fun! Pictures here!

While all that is going on, some of us are still doing some road racing! Congrats to Brandon, Ken, and Geoff Scott who travelled to Michigan to complete one of their races.

Weekly rides are always ongoing. Wednesday rides have been vomit-fast…if you’re not getting dropped, you must be doping! Unfortunately, the girl’s ride is coming to an end due to loss of light (stupid darkness!), but what a great season we’ve had!

Spidermonkey of the Week: Fred Wu

I was told about Spidermonkey in early spring of 2010 thru one of my college team mates. He indicated that due to my desire for both bicycles and drinking beer there was only one logical bike team that would work for me.

It was in the late spring of 2010 when I first met Dean and Vanessa at the 1st Burger and Beer fun run operated at Universal Sole. After speaking with both of them, I was informed that membership was closed to new members. After much pleading to both Dean and Vanessa I was finally let on the team. Since joining the team I have perfected the art of the “reverse breakaway” and my desire to attack the group rides at times that make no sense at all. While I don’t like to admit being a triathlete, I do dabble in triathlons. I think of myself as a swimmer, cyclist and runner.

Fred is one of our craziest and humblest Spidermonkey’s, ask him about all his ironman’s, ultramarathon’s, etc, that he’s done…he recently completed Ironman Canada…congratulations Fred!!