Naiveté
Some of the best things I’ve done in life, I’ve done out of a healthy lack of fear: traveling alone throughout Guatemala immediately after they signed peace accords to end civil war (which wasn’t really over anyway), moving to California after college with no money and no job, and crit racing, to name a few. JMSR was no exception.

Sarah Rice (Slice) wanted someone to go to the race with and my thoughts were that I would visit my friend who lives in Fayetteville, take a road trip, get out of the cold, and race a criterium. I didn’t even know what a stage race was. I quickly found out that in order to race the crit, I had to race the time trial and the road race. I later found out that I not only had to race all the races, but I had to finish each one in order to advance to the next “stage.” That’s why it’s called a stage race, dummy. Even later, I came to understand that people didn’t race for standings as much as time. This changes the game significantly, and especially in terms of team tactics as Slice thoroughly explained. 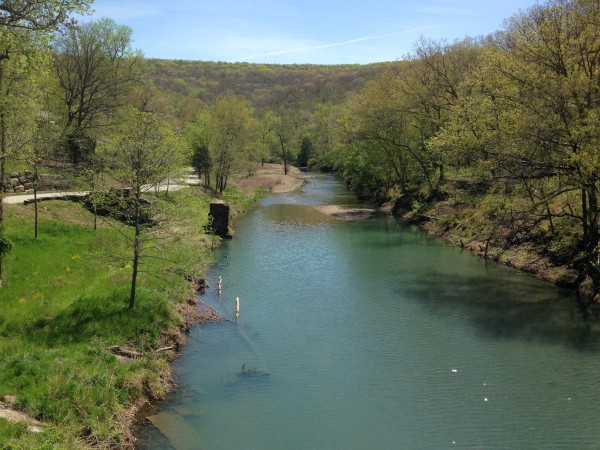 Time Trial
I had no interest in doing a time trial. I heard it was straight up hill with an average grade of 6.8%, so I went to pre-ride the 2.5 mile course and get a feel for it. I didn’t have time to do any warm up and I just tried to go as hard as I could make myself do something that seemed pointless. I almost threw up. I figured this boded well and that I would likely do better in the real thing since it would have at least one point, which would be to not be last. 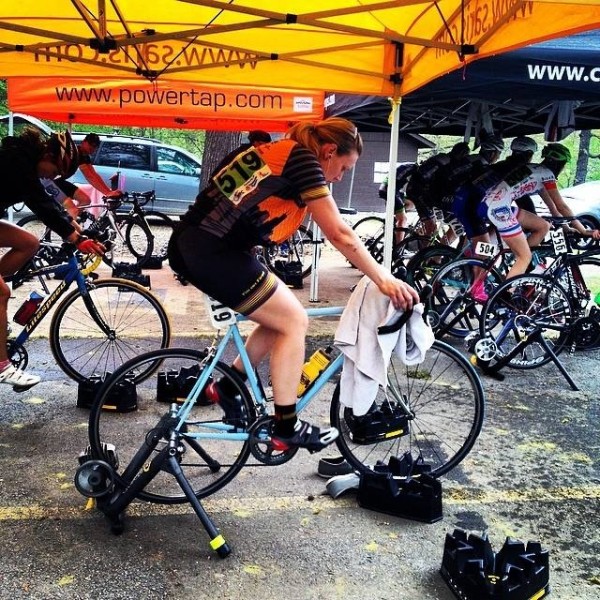 My time trial was at 9:25am. I woke up early enough to eat and get there with time for a warm up. I did a nice long Kristen Meshberg (Kmesh) PWP-style warm up of 40 minutes including one hard threshold effort and a long block of tempo. Through PWP I’ve learned I don’t need long warm-ups, but I also didn’t think I could warm up too much for such a short and intense ride. I almost missed my start for no good reason other than my clock was probably a little different than their clock. I took off sprinting as fast as I could on the flat section before reaching the hill, and then slowly climbed the next 2+ miles. And my time was 3 seconds slower than my practice run with no warm up! Huh? Everyone said I was in my head too much. This is almost always true, but I actually thought my warm up was too long. I came in second to last, so I guess I met my goal, though in truth I expected to do better.

Road Race
Immediately after the TT, I had to cram some food in my mouth and book it to the start of the road race, which was starting only two hours after I finished the TT. (Side Note: all the races were in different locations and only the crit was in Fayetteville) There were so many logistics to figure out in preparation for the road race beyond just where the heck it started. Slice helped me with a lot of this. She taped the number on my seat post, told me I needed to find out if there was a wheel truck, and figure out if there were going to be neutral people in the feed zone or if I could have someone from PSIMET to hand me a bottle. It was only a 40-mile course, but it was also going to be 80 degrees and I didn’t want to run out of water.

Start of the road race

The race start was very casual and stayed slow way long past when the motos told us we were done with the neutral roll-out. The course consisted of a gradual climb with rollers for 20 miles, and then 20 miles back down. I was near the front, but not in the wind, holding a good position. Slowly people started to try to move up and one woman was vying for my wheel. She kept bumping shoulders with me, and I held my position, unfazed. Eventually the person next to me dropped back and I moved over into her spot. I noticed that although these women were very strong, they weren’t all very confident at riding close together, positioning, or holding a line.

I started to move to the very front at mile 8. Cathy Frampton of PSIMET had advised me to tape important mileage markers to my stem. The first one was “the wall,” a major hill at 8.5 miles, where teams would attack. My plan was to go to the front before the hill and try to hang on as long as I could. But where was this wall? The course map was incorrect. At about mile 10, the strong riders took off up “the wall” and I was instantly dropped. Slice had emphasized that this was the point in the race where I had to burn all my matches to stay on, but I was burning everything just to get up the hill, so that was that.

As the main pack dropped me, I saw not everyone was able to go with them and I had the hope of forming a little chase group. However, we were all climbing and descending at different speeds and everyone seemed to eventually pass me. I thought maybe I could catch them on the decent in the second half of the race. I kept trying to talk myself into going faster as it seemed my heart rate was not that high, but my body started to hurt in ways I have never hurt before and I just couldn’t push myself hard enough to catch anyone. I have learned that I’m really unmotivated to ride hard when I have no one to ride or compete with.

Once I passed the halfway point, my goal became increasing my average speed by going as fast and hard as I could downhill. I got up to 46 mph at one point and got to practice taking a 90-degree corner at 34 mph. When I hit the feed zone with 10 miles to go I noticed that I instantly picked up the pace. I’ve also learned I am much more motivated to perform when people are watching and especially if they are cheering. In the last three miles I actually passed one person who must have bonked because I was going so much faster than her I couldn’t understand how I hadn’t caught her before. Again, I came in second to last.

Criterium
Finally, I got to do the thing I love. I woke up early again because my race was at 7:45am, making it the third race I would complete in a 24-hour period. My body was beat. I got on the trainer and felt terrible. I was worrying about riding with a bunch of women that I didn’t know and who didn’t seem to be super-comfortable riding in a pack. And the crit was very technical with a narrow chicane and some hills, including a steep uphill to the finish. Fun stuff. I just kept telling myself it would all be over in a mere 25 minutes. Deep in thought at the start line, photo credit to John Kline 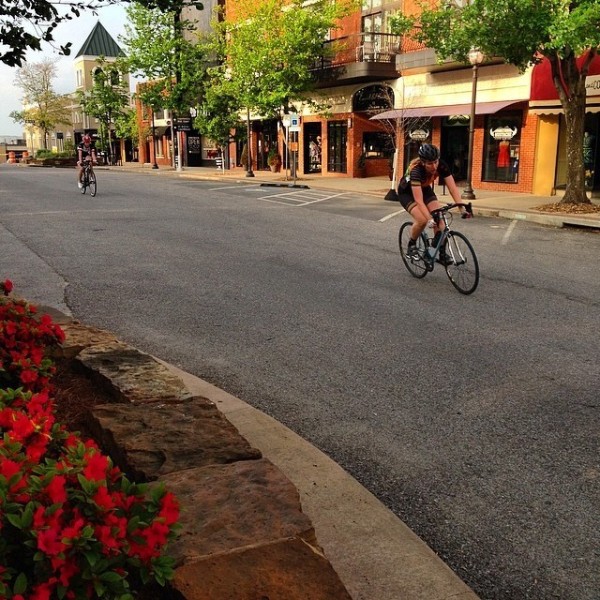 Chicane around the town square, photo credit to John Kline

The course was about a mile long, so we weren’t going to do many laps in 25 minutes. There was a long decent followed by a wide 90-degree turn on the back half of the course. I was going over 30mph and taking it faster each lap. On about my 5th or 6th lap, on the long downhill, my chain got jammed between the cassette and the chain stay—derailleur fail or it jumped out hitting the cobbles at high speeds. Neutral support was half a lap away and uphill, so I tried to coast as long as I could. I pulled over, figuring I was out of the race because it would take me the rest of the time to get back to the support tent. A course marshal ran over, quick-fixed my bike, and gave me a push while telling me I can still do it. Thanks, dude!

By the time I got back in, the remainder of the field had passed me. I felt proud that there had been 5-6 people behind me given the competition in my field. I knew people weren’t taking the corners or the downhill as fast as I was, but I had no idea I was that far ahead of people until they passed me. I was lapped at the finish line and got the bell lap. I worked hard to make up time in my remaining lap and managed to pass one woman within seconds of the finish line. Second to last again, but a proud second to last.

Take Aways
My goals for the race were to complete it and to not come in DFL. It was my first time trial and my first road race. In all honesty, I was hoping to do better than that, but with the top women in my field holding times that would have been competitive in the pro race, I realized the competition was stiff. I got DFL overall based on time, but there were five out of 32 women who did not finish all three races, so completing it was more of an accomplishment than I first thought.

I used to think I would never “cat up.” If I continued to do races with competition as hard as this one, it would be a long time before I would be able to. But doing JMSR made me remember that the point is not to always be on top, the point is to put yourself in situations where you are no where near the top of the competition in order to learn and grow stronger as a rider. More importantly, these experiences allow you to value the times you are on top because they allow you to measure how far you’ve come. “Difficult and easy complete one another; long and short measure one another.”

Epilogue: The Curse of JMSR
Weeks before, amidst freaking out about what I had committed myself to, Slice and Kmesh handed me some sage advice. These goals seemed well within reach and I recommend them to anyone considering racing the JMSR.
1. Don’t get arrested
2. Don’t break your ass in a crash on the start line
3. Don’t blow your transmission

Check, check, and check. Based on my recent experience, I am adding two other real and potential dangers of the JMSR:
4. Don’t step on a nest of baby copperheads
5. Don’t get caught up in a wide-track tornado

We narrowly escaped both. It was biblical. 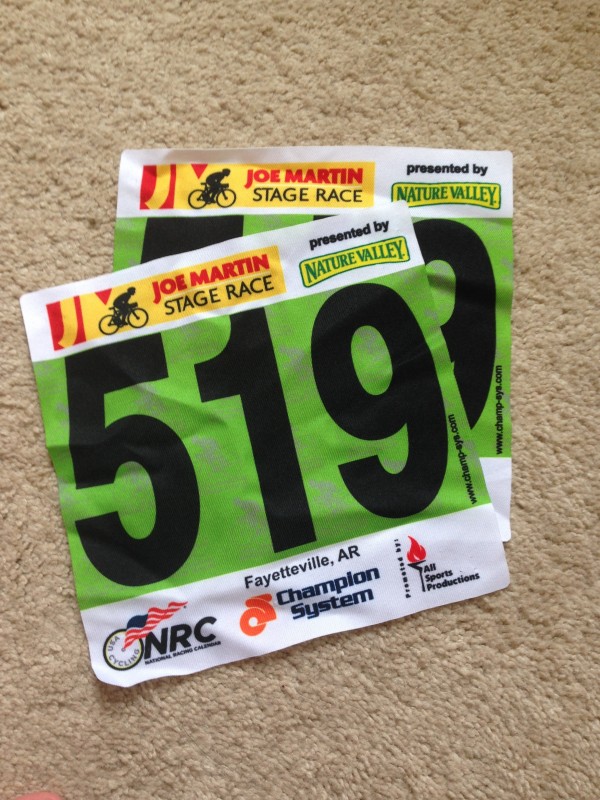