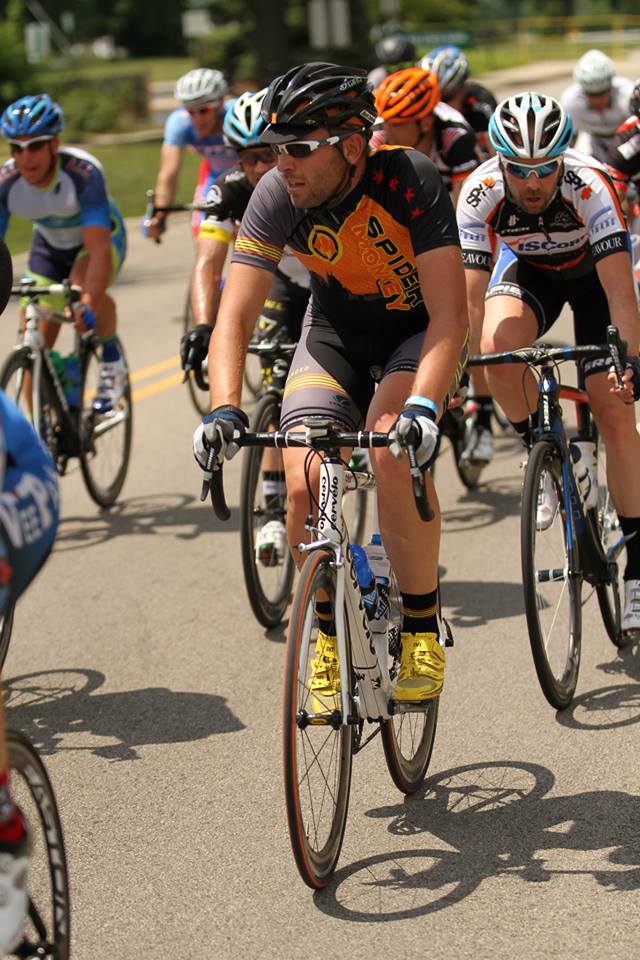 The Kenosha venue is one of my favorite criterium courses I have done over the years. It was part of a now defunct series and fortunately the Prairie State series picked it up and it continues on.

It is a rectangle with wide turns beginning with a sweeping turn one, followed quickly by a 90 degree turn two. A mini chicane half-way down the back stretch keeps it a little interesting before 90 degree turns three and four, and a 150 meter sprint to the finish.

Having recently raced the Tour of America’s Dairyland series somewhat successfully in the Master’s 3/4 category, I decided that would be a good category for this series. Rolling around on the course before the race I met-up with fellow Chicagoan Eric Goodwin (Burnham Racing) who was also playing hooky from work on a Friday.

The race itself went surprisingly smooth, due in part to being a majority of Cat 3s. In past races the sweeping first turn lulls some riders into a false sense of security for turn two, which is tighter and has a deep dip in the apex. I once ended up in the front yard of some nice lady because someone else didn’t remember this fact.

The first third of the race was pretty fast with solo attacks going but not succeeding. After going for a prime I found myself in a group of five off the front with a small gap. I tried to motivate them to keep it rolling but some were not interested and the group quickly caught up. Guess I better work on my sales skills.

One team had a numbers advantage and one of their riders sat on the front of the group, patroling any move and seemingly trying to set-up his guys. I was on his wheel for two laps and asked him if any of his teammates were going to actually try anything — to which he just shook his head in frustration. What a waste.

Getting into the final laps there were a few more attacks. I even tried one with four to go, mostly out of frustration that we were riding slow slowly behind that one team. It lasted a whole quarter lap.

Into the final lap I had a feeling someone was going to go down, and I thought it would be turn three as everyone would be so focused on getting through turn two safely they would try to move up through three. I thought about going on the outside to do this but decided to sacrifice placings to stay inside. It was a good choice as sure enough the riders to my outside lost it into the curb.

From there it was around turn four and to the finish for a decent 18th with all skin intact. Mr. Goodwin took a nice podium spot.

I’ll spare you my diatribe on races, especially criteriums, that use the name “Tour duh…”

Being a Sunday race the schedule started earlier, meaning I could not make the Master’s 3/4 race. So what to do? Oh, I know, I’ll race the Master’s 1/2/3 race — couldn’t be that much different, right? RIGHT?

It was a nice looking course, though the turns seemed awfully narrow. PJ and some others who raced earlier in the day said it was messy. Fortunately, my newly chosen category meant there wouldn’t be any Cat 4s. Unfortunately it also meant there would be more than a few Cat 1s. As it turned out it was equal parts Cat 1s, 2s and 3s.

In one word, faster.

The good part about going faster is that we were mostly single file through the turns and at higher speed, which meant it was much safer. The bad part is that you have to pedal much, much harder to keep up.

The first 20 minutes were great — staying near the front and not having to brake much at all. The second 20 minutes were okay — floating around in the middle and generally picking good lines and riders to follow. Some times moving up to find a better spot but trying not to waste energy.

The third 20 minutes were a little rougher. Started moving to the back, resulting in braking more into turns and then having to jump out of them. The pack started playing around so the speeds fluctuated much more, from near standstill to full gas.

On one lap late in the race, when I was getting cross-eyed, I changed hand positions from my usual on the brake hoods to the drops, heading into the downhill turn. I don’t know why I did it — don’t really remember doing it. BUT it resulted in a slight but important change in my center of gravity. As such leaning into the turn was more extreme than previous laps. As the speeds were high we were all pedaling through the turns and this caused me to clip my pedal in the apex. ROOKIE move! Luckily I was near the back and only freaked out a few riders as my rear wheel kicked up into the air and went sideways. (Must have been the safety clinic the day before that saved me.)

After this I knew that it was just a matter of time before I would be gassed. I told the tailgunner* behind me that I would be deploying the parachute sometime soon, and he thanked me for the warning. (Turns out he was totally punching tickets** — he got third.)

With 10 laps to go, about 60 minutes in, an acceleration on the uphill did me in. But I was happy to have lasted that long at those speeds. And I’ll be ready to roll for the cat 3/4 races the rest of the series.

A rider who rides in last position for most of a race. Most often someone very capable of riding on the front but chooses to coast (sandbag) on the back until the very end.

The tailgunner’s action, figuratively taking everyone’s ticket for completing the lap. Refrences his ability to ride the back by choice and not by lack of form.