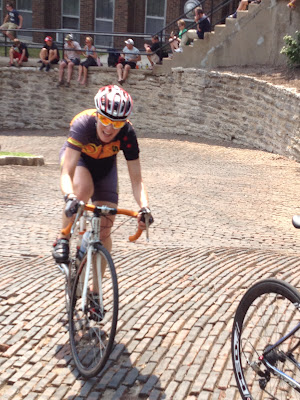 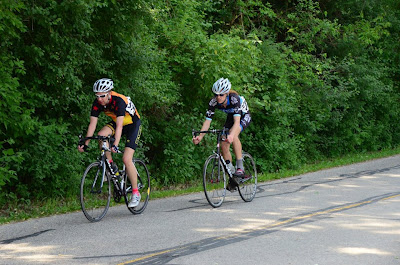 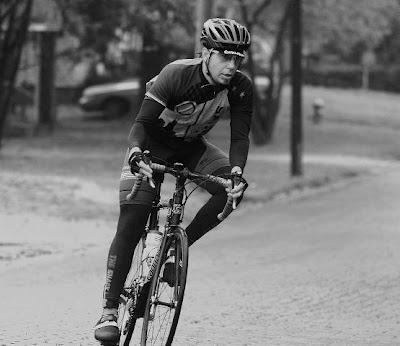 Hillsboro-Roubiax; Though far, worth the trip.  Being the only Spidermonkey in the Cat 5 race I decided to work with our old teammate Paul Halupka (Team Tati).  The conditions were rough with thunder storms all night and morning long.  The fields were not full and even rumors that entire teams turned around and went home (Iowa team left hotel for home).  It rained during much of the race and combined with the puddles on the road more spray was going up then down.  Potholes that were marked with paint were hard to spot being overfilled with water which caused quite a few flats for folks.
My race went well, I stayed near the front and maintained positioning in the top ten.  Around mile 13, a downhill with a sweeping left presented me an opportunity to attack the Vision Quest Team who had been trying to control the race.  It worked so well that my distance off the front was huge and in hindsight I should have tried to of made it stick.  But my limited knowledge told me I have 15 miles left in the race and a huge climb into town with more then a mile finish on cobbles.  After two miles of hammering I decided to sit up and let the pack come back to me.  It took another two miles for them to reach me at my super conservative pace.  Again the rain might had favored my break, but I knew Paul was in the pack and wouldn’t have let me get away.
The course was narrow and had many rolling hills and turns that made for exciting racing.  Coming into town we got caught by the Cat 123 racers and confusion was created as to what we were allowed to do.  Our pace car tried to tell us we couldn’t follow that pack, but several guys tried to latch on and everyone just had to go for it.  The other race was only on lap one and later pulled over to allow our race to finish.  Note to future racers, the hill coming into town is a big grade with a screaming downhill that transitions you right onto the cobbles at almost 35mph.  You have to complete two turns on the cobbles before transitioning off and sprinting on asphalt for the line.  You will need to reserve some energy for these finishing stretches.  With my break and working too much on the front of the pack, I didn’t leave enough in the tank to finish hard.  Just as well, Paul and two other guys tangled and crashed right in front of the finish line resulting in three other guys racing by for podium positions.  I ended up placing very well, 14th.  I would certainly like to go back and do it again as a Cat 4 (two 28.75 mile laps)!