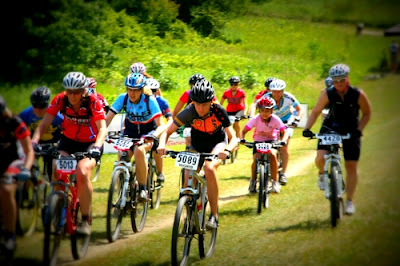 June 22, 2012 / admin / 0 Comments
by Kristi Hanson
CamRock would be my first mountain bike race ever!!! and I was not really sure what to expect. I mean I had a feeling it would be a little bit like a cross race but I was really just speculating. I signed up for the beginners race “Citizen Cat 3” because I wanted to ensure I was not getting in over my head and ten miles was about as long as I had ridden on a mountain bike in many years. I may have endurance but I by no means have the technical skills:) Just as an FYI, each race was made up of 5 mile loops and the higher level categories just did more and had a more technical course.
…….
The race started with a large climb so I knew this would play in my favor. When the gun went off I pushed up the hill and was very near the front. On the second part of the hill it was pretty rocky and the girl in front of me got caught up and ended up getting off her bike. This caused me to slow but I managed to get around her and make it up ok.
As I continued on, each new corner felt like a new adventure. Would it be a log, a sharp corner, a steep climb?? Never really knew but just took them as they came.  The first hard section for me was a switch back that was pretty bumpy. I made it around the first corner but then I had to unclip for the second part and ended up taking it on foot. During this section, two girls caught up to me and one of them stated “I would really like to pass you”. My initial reaction was ok well then passes me but all I said was “go ahead”. It would have been fine it she would have just went but instead she decided to dink around and then I got kind of mad and I may have not said the nicest of things.  Afterwards I felt really bad but there was nothing else I could do at this point so I just continued on.  I think the most frustrating part was that I just passed her back about a minute later and stayed in front of her the rest of the race.  I guess I kind of view this like a cross race, where it is the other rider’s responsibility to make the pass and I should not have to wait for you to pass me. Maybe I am wrong; I mean this is my first mountain bike race so what do I know :)
After this section there was a lot of double track and it allowed me to pass a few more girls and a few of the slower guys. When passing the guys they were all AWESOME and so ENGOURAGING!! They would usually move over for you and would follow it up with “GO GET THEM!!”
The next section of single track was tough because it was filled with logs. Most of them I made it over and after each I may have followed it up by saying “Nailed It”. The last one however, ended up costing me a spot at least for now.  I took the path of least resistance (i.e., went around the log) and a girl passed me right over the log. I give her a “NICEWORK!!” and she road off. I told myself next time you will go over the log!! No time to be a baby.
After the logs, the next section had a steep hill I had to go down and then another steep hill I had to go up on the other side.  This is typically where I failed at Palos but I just took a dept breath and off I went. Success!! The hills were followed by a few burns which if taken correctly could be fast. I did not figure this out until the second lap so the first lap I took them very slow.
The technical stuff was followed by a straight away which I basically sprinted and then a few switch backs that were pretty easy and it was off to the second lap.
Read the full story at Kristi’s blog.
Official Spidermonkey Participant List:
Amy Ancheta
David Cushman
Kristi Hanson
Jonny Klopenbach
Jan Van Nuffelen