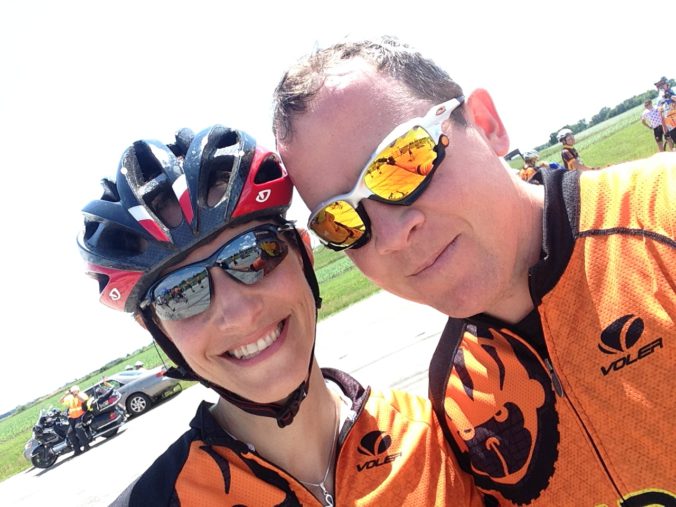 You’re getting a two-for-one with this Spidermonkey profile, but I’ll (Zach) be doing the “talking” here.  Gina is far too modest to brag about herself adequately. She also attended Indiana University for four years, so she’s not that strong with the written word. I’m a Purdue graduate (hence the obligatory IU ribbing) with an engineering degree. 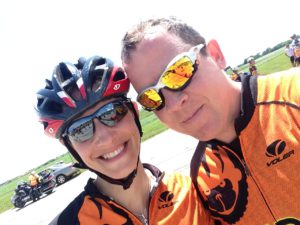 Gina graduated from Indiana University, but that was only the beginning for her. She also has a Master’s degree and a Physician’s Assistant degree from Chicago-area colleges. Gina works at Rush as a Physician Assistant and I’m a 19-year employee of Sonoco Products Company as an International Engineering Manager. We have two dogs, no kids, and we live in Bucktown. The boring stuff is over.

This is a couples profile, so I’ll start off with the non-cycling action first. Gina and I met here in Chicago back in 1999. Her roommate was dating my roommate. Gina and I got along well enough when we were all together, so they thought they would try and hook us up on a blind date that was rife with lies and deception. Gina’s friend told her that I wanted to go out with her. My friend told me that Gina wanted to go out with me (a wildly optimistic idea to this day). Gina and I figured this all out in the middle of our first date during the intermission at Phantom of the Opera. Either way, it was funny and it worked.

We dated for about a year before I was transferred through my job to Southern Indiana. The long distance relationship begins here. We really weren’t that serious at the time, but she cried when I left….so that’s something, right? I was down there on my own and the roads are absolutely amazing for cycling. 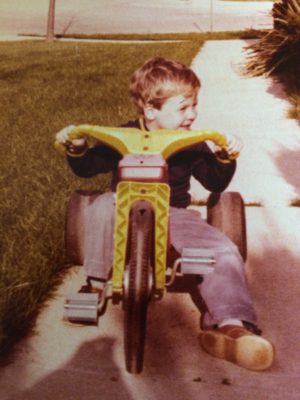 Zach as a child (tri)cyclist

I had been on bikes a lot growing up in the mountains of Asheville, N.C. Where I lived as a kid, you can’t get anywhere without a car or a bike and I was far too young to drive. If you want to go and hang out with friends after school, then you ride up or down very steep hills to get there. I had a 45 pound, Columbia mountain bike and my parents were into road biking (old school, 1978 Univega’s, since you asked). I bought a decent mountain bike when I moved to Indiana in 2001 and quickly realized how inefficient they were for the roads when I was passed routinely by a pack of road cyclists. They waited up for me one day and encouraged me to get a road bike. They told me it would change my life. That was a true statement. 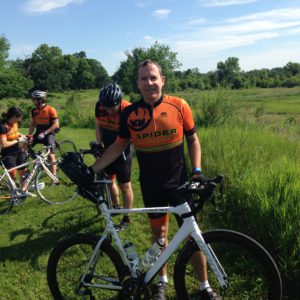 I bought a really nice road bike and started out on my own. I had a lot to learn. It wasn’t long before I ran into that same group of riders. When I say, “ran into”, I mean they were passing me. They waited up again and they let me tag along for 20 miles. Over the next few months The Southern Indiana Wheelmen taught me the hand signs, the etiquette, the safety, and the beautiful addiction of road cycling. They treated me like a brother immediately and I’ll never forget it. I gradually started improving and learning how to pace myself on the steep ascents of the area. Then, when they thought I was ready (I wasn’t) they invited me to the Wednesday night drop ride. I asked, “What does that mean….drop ride?” My new friend said, “Well buddy, you need to know the way home because these boys are on a hammer fest and they won’t be waiting for anyone who gets dropped.” I did that ride with them every Wednesday for an entire season. There are zero stoplights, which means there is zero chance you will get back when you leave that last wheel. Fact: It wasn’t until the last month of that first year that I was able to hang on and complete the entire ride with the team. 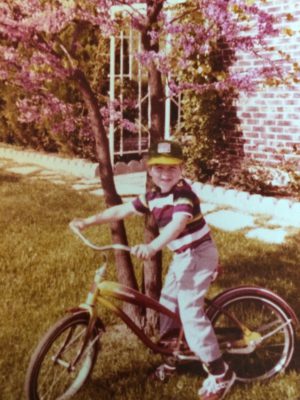 Zach (again) as a child cyclist

Here is where Gina comes into the mix. We got married after a long-distance engagement when she was in school in Chicago and I was working in the hills of Southern Indiana. She moved in with me and she was quickly interested in my addition to riding bikes. We bought her a decent Fuji road bike and I started teaching her the ropes. What I didn’t tell you about Gina is that she’s extremely athletic, extremely driven, and extremely competitive. 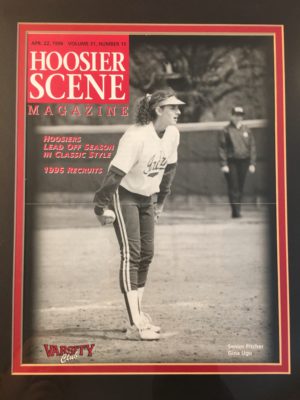 Focused on her next pitch

I forgot to mention that she was an All-American, 4-year, full ride pitcher at I.U. (see beast mode picture). She was amazingly good and she has a Big Ten ring to prove it. You don’t know that because she is too humble to talk about it. Anyway, she HATED it when I rode past her up a hill. She HATED it when she got dropped. None of that lasted long. She got strong super quickly and it didn’t take her long to get comfortable with the new road bike. We rode every chance we could down there and we loved it. To us, it’s a blessing that we have something like cycling that we enjoy doing together. Special thanks to The Southern Indiana Wheelmen. It’s a great group of people down there and they put some serious miles in.

So, after a 2-year transfer in the U.K., Gina and I relocated back to Chicago in late 2008. We were looking for people to ride with when we bumped into Charlie Jollis one morning. Gina and I were taking donations and handing out candy for Misericordia on Fullerton and Damen. Charlie was at the stoplight headed south after the Saturday morning ride all kitted out in orange. We asked him where he came from and who he was riding with and the rest is history. Gina and I showed up the next week we quickly realized we had met the right group of people for us. We rode with the Spidermonkeys just about every week for the entire season from that point forward. We were asked to join the team late that year and we are so happy to be a part of it.

Teaching people road cycling is a gift, and it’s free. Those guys in Southern Indiana didn’t have to slow down and talk to me. They didn’t have to teach me the ropes when I got my road bike. Spidermonkeys did the same for us in Chicago. Gina and I truly appreciate the openness and friendliness of this group of people. Thanks for having us on your team. 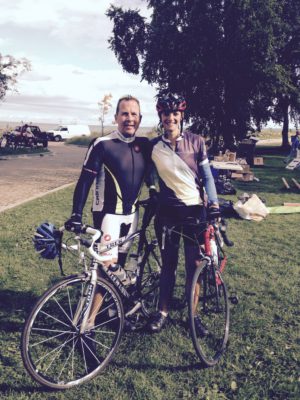 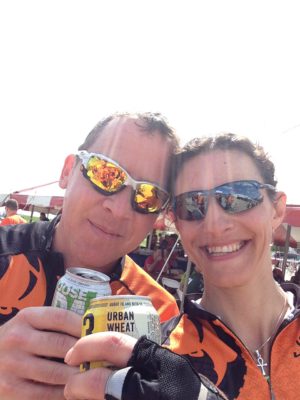