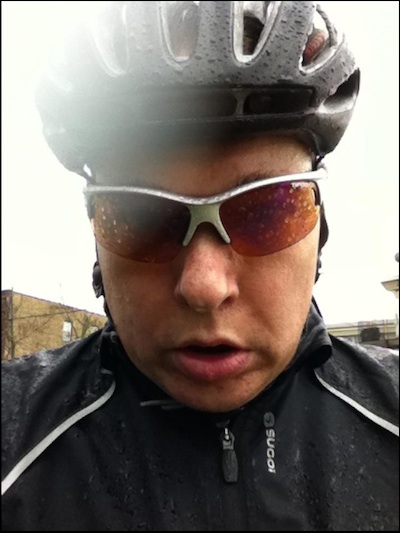 March 8, 2013 / kelly / Comments Off on Spidermonkey of the Week – Michael Montali 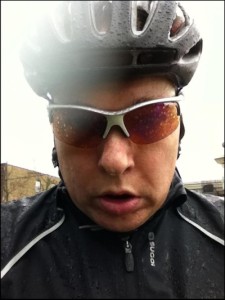 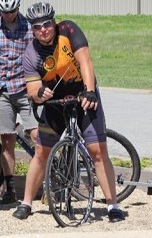 I started with bicycles at some very young age when one of the older kids on the block asked to ride my scooter. He had a bike and told me to try it. I didn’t know how to ride bikes but I threw a leg over it, rolled down a small hill and started pedaling. The balance and ability to judge the momentum all came to me in a flash and I was off! So in an instant, and fairly unexpectedly, I opened my account in the world of 2 wheeled machines without the need for training wheels or parental encouragement. Pretty lucky I think! 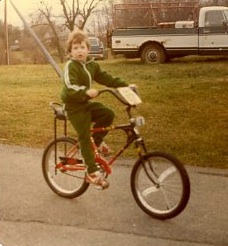 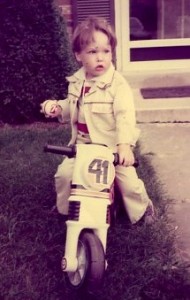 I must admit that aside from a few events, I’ve never been involved in much organized cycling…but have always made bikes a major priority in my life. I’ve enjoyed many years of mountain biking, year-round urban commuting, and bicycle camping adventures. 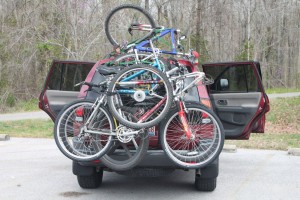 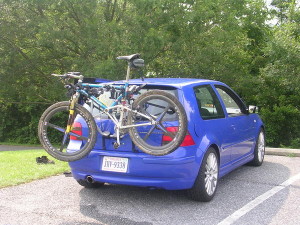 (L) – From a 2011 camping trip to southern Illinois, there’s a rack under there somewhere. (R) – My mountain bike and v-dub.

Possibly the most interesting part of my cycling history is the fact that I did several stints as a Chicago bike messenger through my 20’s. Hey, I know messengers are sometimes questionable members of the cycling community (especially back then when more abundant) but when you’re involved, it’s a hell of an adventure and there are some unbelievable characters out there. One winter day in the mid 90’s, I was walking around the loop applying for crummy service jobs and I saw these guys whizzing around on bikes delivering packages. I thought to myself “hey, I can do that!” and so I threw out my pitiful little stack of resume’s and signed on to be a courier. Thinking back, it was an awesome evolution through the world of urban biking and bikes in general. I started out on a hybrid specialized with knobby tires. In the messenger world you learn fast about how to get fast because you are paid by the delivery. Profitability involves everything from equipment upgrades to paying off the security guard at the dock so he’ll let you use the back elevator to grab a package. I bought a pair of “slicks” and eventually moved to a nicer aluminum mountain bike. Then I bought a road bike and made many refinements to it. I bought technical clothing and added clipless pedals. And then, because it was the ultimate, I bought a track bike with no brakes. When you ride that many miles, it’s fun to change things up and/or have a quiver of bikes. I really enjoyed the fitness that came with riding all day and the toughness involved in braving the elements. I used to joke that I was a professional athlete because I was paid to ride all day. Of course, it was very dangerous and lacked health coverage. I got into a few accidents but became agile enough on the bike that I was able to avoid major injuries. I remember once that I was hit by a car and stayed up, it just knocked me into a new direction and I kept going. 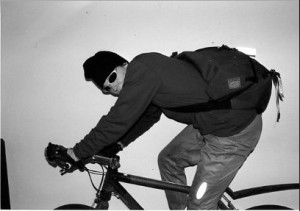 The messenger gig gave me the tools, experience, and attitude I needed to be a year-round bicycle commuter. I changed a lot of flats! I really dislike waiting for public transportation and so when I chose to go back to school, I rode my bike everyday and everywhere. Once, I broke a bone in my foot and had to wear one of those stabilizing boots. I ended up velcroing my crutch to the frame of my bike and pedaling with one foot clipped in and the boot resting on the pedal. It worked great, even in the snow! 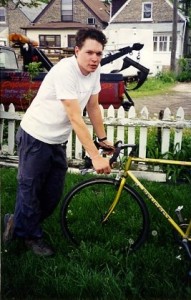 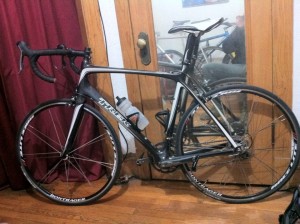 I’ve been a big fan of professional bike racing since the late nineties. The first race I remember starting to learn and understand race rules and tactics was the 1997 TDF won by Jan Ulrich. My favorite cyclist became Marco Pantani (The Pirate) and he won the Giro and TDF the next year. The Lance Armstrong years were a lot of fun to follow because of the great national buzz and the spotlight it gave the sport…despite the mess it’s all become.

It’s never occurred to me to participate in racing myself, I guess mostly because even when I rode everyday and was pretty thin, my body type is just not that of a cyclist (more like a bowler now!). But that ability and time spent in the saddle never really goes away. It’s awesome when you find new ways to keep cycling in your life! So I started doing rides with SMC.

I can truly say that it was an awesome experience the first time I went on a ride with the Spidermonkey’s. To have the chance to emulate a sport that I’ve watched closely for many years, and one that’s impossible to replicate on your own, it made me wish I had started sooner.

I really want to thank the ride leaders and other team members for all they do to provide great rides, the team experience, and useful tips (or offer a wheel to a temporarily winded teammate). Dean, Vanessa, John, Brandon, Drew, Stephanie, Josh, Mike, and Trent all come to mind. And thanks to DJ Ryan, who is my longtime friend, cycling buddy, and the one who brought me into Spidermonkey world. 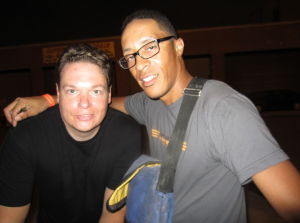 DJ Ryan and I overserved at the Harvest Ale dock party!

Guest Spidermonkey of the Week – Jim Twomey aka JT