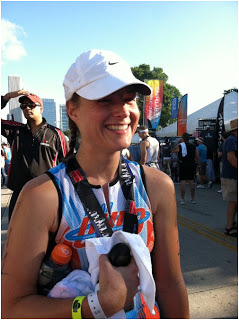 December 7, 2011 / admin / 1 Comment
Wow, after reading the amazing posts by Kelly and Paul, I feel like I’ve got a lot to live up to! Many of you may not know me – I haven’t been on a lot of team rides this year and only got to know the Spidermonkeys at the end of last season – and between grad school and internships and work, I felt like I hardly had time to ride this year! I’m going to make up for it next year, though, so look out for me then! In the mean time, here’s a history of my relationship with two-wheeled transport.
First Bike. At the age of about 4 or 5 years, my older sister got a red and black BMX bike for her birthday; it was so bright and shiny I immediately determined I would get a bike of my own, even though I did not know how to ride. I got her hand-me-down, with training wheels, which I didn’t mind because they meant I could go wherever I wanted without fear of falling or knee scrapes! My sister was of a different mindset – and after having to ride around the park with me a few times she couldn’t handle the noise, and refused to ride anywhere with me again unless I took them off. My next bike memory is being pushed down a grassy hill – toward the street – by my sister.
Hitting the Slopes. Luckily the story must have ended well, because the training wheels were never put back on, I didn’t wind up in the hospital, and my next major bike memory is getting a mountain bike in junior high. Red and black, like my sister’s old BMX, I think it was a Trek and it made one major, but memorable, excursion to the early June mud of Teton National Park before it got stolen. My best friend and I had decided we would simply strap our snowboards to our backpacks and ride our bikes up to the snowpack, hike, and ride down. We sadly overestimated our biking skills and never made it to the snowpack, let alone rode down it on snowboards!
Many years later, working in Portland, OR, I decided it would be brilliant to get a new mountain bike so I could explore the major metropolitan forest preserve, and hopefully parts of Mt. Hood. I got to know Forest Park fairly well, but soon moved to the East Coast where the bike fell into disuse (pavement makes nubby tires sad), and I took the subway more often than wheels. New York was too much city for me, and being underground was claustrophobic, so I got myself a cheap steel frame off E-bay and began adventuring the main roads of Manhattan to get my adrenaline fix. Riding the streets of New York was amazing, so when I relocated to Chicago for grad school in 2009 the first major purchase I made was a little mixte commuter from Working Bikes. Once spring rolled around I got myself a road bike.
Road Bike. Mmmmmmm…  I knew absolutely nothing about bicycles when I bought that bike. I just knew I wanted it, and there were no mountains around so I had to find something to do with myself outdoors. Over my first summer in Chicago, we made friends. I rode my bike a LOT, and decided I would do the North Shore Century on it, just because. My bike was awesome. It needed to do something important!
I trained and rode alone most of the summer because I didn’t know anyone else I felt comfortable riding with. By the end of July, though, I was getting worried about the ride – I’d never done a century before. Were there rules to riding in a group? How would I know how to do it? How would I be able to keep going after mile 75? What if I crashed??
After asking around with a couple of friends who raced, I found out about the Spidermonkeys, contacted Vanessa, and decided I would at least “try” to keep up during their last Saturday morning training ride before the century. I was slow. And I got dropped. But it’s a no-drop ride, so John was nice enough to hang back and try to coach me through the last mile or so to Highland Park, using terms I’d only heard on television and concepts I’d never applied to riding a bike before.  It was very kind, but it didn’t really help me get there any faster. I pretty much decided that even though I loved my new bike, maybe I needed more practice; maybe I wasn’t ready, or maybe I should just give up and do the century next year…
But by the following Sunday, I had changed my mind back and figured I didn’t have anything to lose. I could always turn around at the metric century point, and I was determined to at least make an effort since it had been a goal all summer. I had no idea what to expect and didn’t even know anyone’s name, I just looked for the Spidermonkey jerseys in the parking lot and got up the courage to walk over and introduce myself. I asked if I could tag along, and never expected to keep up past the first rest point, let alone the entire ride. THANK YOU! To everyone who was so supportive! Vanessa, Dean, John, Kristi, Grace, Geoff (particularly when we got lost before the last checkpoint), and everyone else who rode with the group last year – I managed not only to keep up with the group that day, but LOVED it! It was way more fun than I ever expected and, even though I got dropped (before the last checkpoint) I managed to finish with some Spidermonkeys towing me along. In sneakers. And mountain bike shorts. (I do NOT recommend the latter, lesson learned!)

Soon after the NSC, I signed up for VQ and got to train with everyone for several grueling weeks. I had no idea how hard it was going to be! Sadly, the VQ sessions ended midwinter, school took over my life, and the rest is history. Not quite… I did get inspired by Grace and Kristi on one of the girls’ rides to sign up for the Chicago Triathlon. Trent and Geoff held a (private) tri clinic with me that was a major help in setting up my transition space. Even though I trained with Team WILD (women inspiring life with diabetes), I tried to go on a few early morning rides to keep up appearances, which is how I wound up discussing cyclocross…

I didn’t even know what cyclocross was at the beginning of last year. Now, after two seasons riding a road bike I can’t believe I didn’t know about it before! I participated in the Half Acre clinic in September, on my old mountain bike from Portland, and decided it would maybe be fun. I wasn’t convinced. All that jumping on and off your bike, and carrying it? Mmmaybe not… But thanks to Kelly’s invites to practice, as well as the rest of the Spidermonkeys’ enthusiasm I decided to take my bike out to Sunrise Park – because it had rained and I had to ride a mountain bike. I was hoping it would be a benefit in the mud.
It was. A little bit. More important, I realized I’d had a blast once I recovered from the gasping and burning sensations in my chest. I vowed to race again.
A few weeks later, I hadn’t been back on my bike but I read about the Indian Lakes course and had been updated on all the Spidermonkey success and went ahead and registered. Note to self: do not race bikes (especially heavy mountain bikes – thanks for the reminders, Dean!) if you haven’t been practicing. Because I ended up deciding mid-race that I was NOT having fun. Once again, however, I felt great a little while later and was really sad I hadn’t tried harder. That may be my motto next year – rider harder, go faster! And maybe I’ll try the heavy bike out in Palos instead…
This ended up being a lot longer than I originally thought it would be! To end it, I’ve had an awesome, inspiring and fun time both riding with the Spidermonkeys and participating in some of the other events they’re involved in. Their competitive nature keeps me on my toes, but for someone who loves going fast (just about any way you can – surfing, snowboarding, biking, lead foot…), I am not competitive and have gotten turned off by the need to WIN in the past. I love riding with the Spidermonkeys because most of the time it’s okay to ride just because you love it. Because it’s fun and it makes you feel good. If you can win while doing it, that’s just an added bonus.