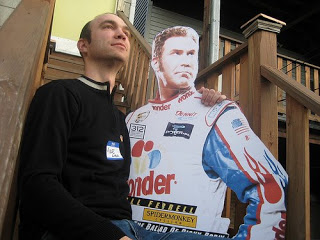 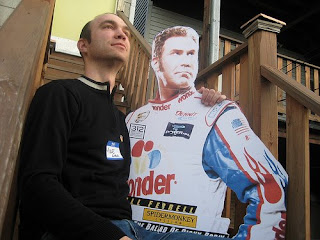 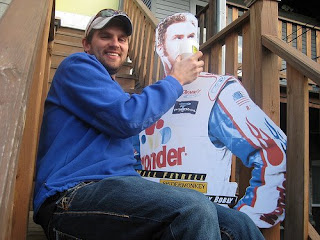 Superweek continued in Richton Park on Monday and I couldn’t think of a better way to start the week than racing my bike. Mike Shea and I headed south to Richton Park.
The course was a .6 mile four corner crit with some curvy roads on the front and back stretches. We arrived and saw Geoff from Get a Grip would be racing with us today. I pretty much consider Geoff a teammate, I mean he comes with us to Rocks after the soldier field crits to eat burgers and drink bombers (312 for me). So the three of us did a pre ride of the course to look at the turns and identify any problems areas on the course, we didn’t really find any. However, we did notice that turn two might cause some issues if the guys on the inside didn’t hold their lines. We all continued our warm up and I spent a number of my warm up laps talking to a rider who came in from Marquette, Michigan (that’s in the UP). I could tell he was a strong rider and making nice with him prior to the start could benefit me later.
As we stood at the start line I looked around and noticed a couple racers who I may want to stay away from; the guy with the toe clips and stuffed pockets (it looked like he was hiding a small animal in his back jersey pocket) the guy with the numbers pinned the wrong way, and the guy who was gonna race with his saddle bag and his hand air pump attached to his bike. We stood at the start line for a quite a while, and one of the bicycle heaven guys said “this race is 25 minutes right?” I replied “no its 25 miles (or about 32 laps)” the look on his face was priceless! Ken from XXX chimed in “I made that same mistake at Blue Island” (sidenote: only one xxx guy (ken) in the race, never seen that before)
The race started and for the second race in a row I actually clipped in without any problems. The race rushed into the first two corners, the guys I had identified as possible “stechy riders” lived up to their billing, the toe clip guy took the second corner about as bad as humanly possible! One of the bicycle haven guys yelled “you gotta hold your line, or you are gonna kill all of us” and he couldn’t have been more dead on, this guy was gonna hurt one of us unless we dropped him off the back quick! I made sure to get as far away from that guy as possible for the next couple of laps, and thankfully we dropped him about five laps in.
The pace at the beginning of the race was brutal, two guys from Springfield (I think they were on Team Hammer) took a strangle hold over the race, they set the pace, just the two of them. It was the most impressive display of dominating a race I have seen at the cat 4 level! Finally someone went to the front to slow the pace frantic pace. The early pace spit riders off the back only the stronger riders survived.
Several attacks went off the front, none of these riders were able to hold their attacks for more than a lap or lap and a half. The best attack occurred somewhere around 15 laps to go, it got off the front and a guy from bicycle haven asked me to go chase it down with him, I declined I just didn’t have it in me.
With seven laps to go I realized I had no idea how many laps were left, I rode up to mike shea and asked him, he told me “7” the others riders in the group tried to trick me and said “15” or “12” and one said “2”. Lesson learned, always keep an eye on the lap board, or find a teammate, because everyone other than your teammates are there to beat you!
With five laps to go the pace got pretty serious, everyone knew that position would be king, and a field sprint looked like a real possibility. I did my best to find a spot in the front of the pack and hold it over the next few laps, but as we entered the final lap I was stuck mid pack, and out of the last two turns I struggled to gain better position. As I came out of the last turn I knew it wasn’t going to happen for me, and I sprinted to the finish (passing a few guys) to finish a respectable 22nd. Mike Shea got another top 10 coming in 7th and Geoff (who gave mike a lead out) finished 19th. The two guys from Springfield went 1-2 in the race, hats off to those two.
It was a good race and I learned a couple important lessons:
1) Always know the lap count
2) Position is key
3) Work on holding my position in the last couple turns
4) Learn how to sprint