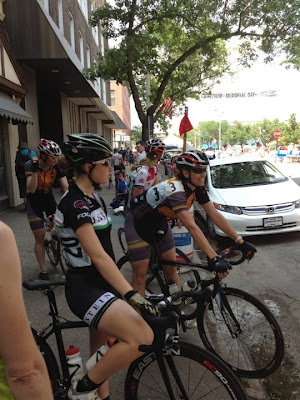 Kristen and I were both jazzed up for Quad Cities. The course and conditions favored us- a long fast crit, lots of turns, 15+ MPH winds. YES. And Kristen knew what it took- she had won it before. I was doubling again, so we got to Rock Island early for the Cat2/3 race. I warmed up on Kristen’s trainer and watched the Juniors race before ours. Bad weather rolled in and it started to rain. 6 separate crashes happened on corner 7 within about 10 minutes. I got nervous, knowing I was still at a point where a hit to the eye would mean likely surgery and the end of my season. But I could not chicken out. Not again. Not today. It was pouring rain and I was dry-heaving at the start. My legs felt horrible as I hung on to the back of the pack for dear life. I could taste rubber and tri-flow from the wheel in front of me as the grit and rain sprayed in my face. I really thought about pulling out. But somehow, and I wish I remember how, I found my nerve. The voice in my head said, “Wait for the crashes, then attack like crazy”. On cue, BAM!! An ISCorp rider went down at corner 7, a few wheels in front of me. I took a hard inside line, avoided it, and sprinted up to a group of about 8 riders in front. Out of breath, I said “Crash behind, time to go!” And they took off. I held on. We didn’t split too many off the pack, but clearly the strategy worked and now I was riding in the front 8-ish wheels, out of the fray. Bam, bam, more crashes behind us. 6 to go, 5, 4. My legs were coming back. I was riding strong with the front group. I had Jeannie Kuhajek marked and we were 5th and 6th wheels on the final lap. Perfect! If she sprinted from the hotel about 600 yards from the finish, I would stay on her wheel, pass the others, and take her on the final turn and sprint. If she didn’t go I’d try to take them down myself—but option 1 was surer. She started to sprint from the hotel (Yes!) but slid out and crashed right in front of me. I cut inside to avoid her and stood up to sprint. The adjustment and my crappy sprinting kept me in 5th, but I was happy that I’d found my nerve in that messy race.

Before the afternoon P1/2/3 race, Kristen still didn’t feel good and almost didn’t want to race. It’s a lot tougher to be the ace—the one who’s won it before, who everyone expects to do well ALL THE TIME, than to be the forgettable scrap who’s trying to earn a little respect. I gave her a hug and told her that she didn’t have to win every damn race she does.

ASIDE: That is not true. Kristen knows it, and I know it — you don’t become a champion thinking that you don’t have to win.

I didn’t expect to see her at the start. But she rolled up. I was thrilled. Debbie Milne was the wheel to mark after her performance at Melon City. Kristen was off the front with her very early in the race. I thought that they might take off and started blocking, but they sat up. The front of the pack took turns attacking. I chased a few down to keep position for Debbie’s inevitable launch off the front. It was kind of frustrating, because that’s what everyone was doing. This crit was very predictable…. but maybe not! With about 12 laps to go, Kelli Richter took off and got a nice big gap of about 8 seconds. I thought maybe I could bridge and we’d be gone, just because no one would take us seriously and she had 3 Psimet teammates in the pack to block. But I got about halfway up to her and it just didn’t feel like it was going to work. In retrospect, I think Kelli had the stuff to slip away and win it, and I am still second-guessing my decision not to go get her. I got caught, but stayed toward the front. Debbie attacked with 6 to go. We chased, and caught Kelli. Then with 4 to go, the real move came. Jessie Prinner took the inside line and took off to Debbie. I got her wheel! I had it! This was the move! This was the race! My head screamed at me to hold on and I gave it everything I had, but after a half lap I was losing it. Cramps rocked my body up and down. I watched them ride off, the moment burned in my brain. That is what I will think about when I ride the trainer this winter. Other riders surrounded me. Kristen was there! She took off at the hotel! I wanted to go too but couldn’t. I was done. My hips were too wobbly to stand and I was in a lot of pain, but I smiled and watched Kristen blow past the pack like they were sitting still and win the field sprint for 4th place. I wound up very disappointed with 18th.

That WAS the move. Jessie Prinner won, and Debbie came in second to her monster sprint. Following Jessie’s move was costly, but I am proud that I tried. Debbie is about to go pro. Jessie is an Olympic hopeful. I am a 38-year old medical school professor, a new cat3, with one year of racing experience and two facial fractures. But when the moment came, I was there and I chased them with everything I had, and learned where the bar is set for P1/2/3 racing. It is high- for now.