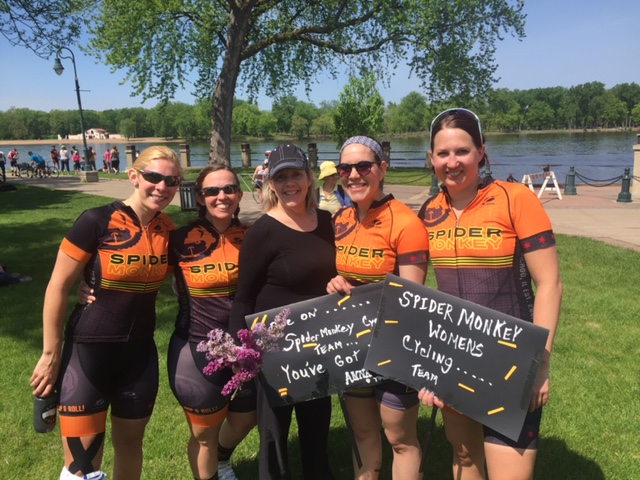 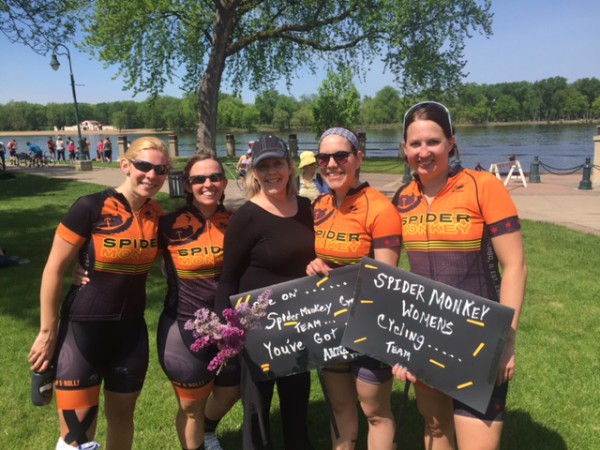 I’m still smiling from this event. Things I discovered:
1. I am not a good Road Racer
2. I suck at climbing
3. I LOVE crit racing
4. My sprint has gotten really strong
5. A proper warm up and cool down is everything

Saturday/Road Race
I’ve never done this omnium before, but I’ve heard it’s legendary. I was a little bummed that I couldn’t do the time trial on Friday given this was a significant part of the overall series, but then I saw the mountain to climb for 2.5 miles and was no longer sad I didn’t get to compete. My buddy Ashely from HAC and our new teammie Anna and I all road tripped up to WI late Friday night. We didn’t get too much sleep Friday night since we rolled into La Crosse around 12:30am, and wanted to be out of the house by 6am to drive the course before the race. After driving the 13 mile loop we were to do twice, we went to register and warm up. After a 30-35 min warm up I felt ready. I started on the front line with Ashley (HAC) and two other women for the neutral rollout. As the whistle below and the race started I was still on the front with Ashley and Jody (ISCorp who I’d raced with, and beat in Menomonee Falls a few weeks prior). The three of us hung up there for several miles. Ashley and I were discussing how to get off the front so we didn’t tire out too much in the first few miles – cuz it was WINDY! Since we couldn’t, we started to just trade places and take turns pulling each other so that neither of us went out too hard at the start. This certainly confused the pack… :-)

As we made the first turn, about 3.5 miles in, I knew the giant descent was coming up. I also knew I wanted to be on the front of it since I’m a good descender and a terrible climber. I wanted to make people pass me. I was the first down the descent, first into the turn, and on the front, again, as the climb started. I was fine with it, but I foolishly turned to Ashely and said “this is where I’ll get dropped.” I knew I would, but I wish I hadn’t put that negative energy out there; it definitely affected me. I just couldn’t grab a wheel enough to stay on up with the pack on the long climb. Bummer. As we came over the top of the climb, the wind was in our face. I got on a wheel after a few minutes, and just tried to stay low out of the wind. The pack wasn’t that far in front of me, maybe 20 seconds. But, since I had another loop, I didn’t want to burn my matches.

After some serious determination and sucking a wheel for a bit, I was able to get back together with the group just before the final turn into the long stretch up to the start/finish. It was quite an effort…even the moto ref made a comment about it :) I decided to hang at the back of the pack for the next several miles to recover and conserve some energy. If I got dropped that early on the climb in lap 1, I wasn’t sure how lap 2 was going to go.

As we go closer to the first turn, I made my move up the right side of the pack to get toward the front for the descent. It was aggressive, and I’m pretty sure I irritated some people, but I didn’t care. I wanted to be toward the front of that large group. Unfortunately, I didn’t get far enough to the front before the downhill, but I was able to take the descent at a fast speed (actually I was surprised how fast these ladies were flying down the hill…guess I’m not the only one with no fear). As we turned into the climb, I was right where I wanted to be (for the most part). I was with the pack, on the left side, but I was on a strong-ish wheel. I would have liked to be IN the pack to protect me a bit more. I stayed with the group for at least half the hill, maybe a tiny bit more, then got dropped. As I came to the top of the hill the pack seemed farther away then lap 1…I wasn’t sure I could bridge up to them. Meanwhile, one woman (Erin, a 4x Ironman) took a flyer off the front on the downhill, and ended up staying away for the next 10 miles to win the race (WUT?!). I just kept my head down and pedalled until I caught up to a Northstar woman whose wheel I rode for a bit after the top of the hill. It was certainly winder this loop than the previous one. I tried to work with her, but every time I came around to offer a pull, she’d come back around me again. Fine, she can pull me through the wind all she wants!

We eventually bridged up to a Trek woman, whose wheel I switched to. Again, I offered to do my part and pull, she made a comment to me that I looked like I had a good sprint. I said “we’ll see, it’s real windy out here.” She came around me and as she was getting back on the front said that she has no fast twitch fibers/muscles, so it seemed like she wanted to pull me. Um, ok! I rode her wheel through the final turn, then for a few more minutes until I could see the finish. I got out of my saddle and gave a nice big effort to cross the finish line. I placed 9th, just a few min behind the pack. I rode another 5 min out with Ashley (who got 8th and was SO strong in the race), then back to the car where I hopped on my trainer for another 15-20. Overall, I probably cooled down for 25-30 min. I’ve learned over the past few years that “a good athlete does a proper warm up and cool down” (quote by Jason Meshberg). It was going to be really important for me with the crit the next day. 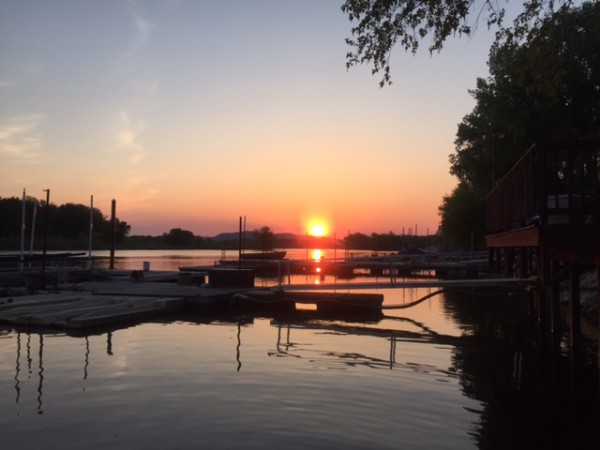 Sunday/Crit
I woke up for this race feeling mentally ready. A great night sleep, a proper cool down, time on the Mississippi on the dock in the sun with my friends…all prepared me for the day.

We rode to the race from our house (only 2 miles away) and did a quick recon of the course. After 3/4 of a loop, Ashley and I went off on our own to warm up. I was nervous, the legs felt really heavy. Heavier than I thought they’d feel. I did a solid 30ish min warm up, including some tempo time and 3-5 sprints…all I could do was mentally stay engaged and at the front of the pack for the entire race. Not ON the front, but toward the front.

I lined up on the front line, and it was one of longest wait times I’ve had sitting on the line. This is the only part of the race that gets to me…the longer we sit, the more nervous/anxious/etc. I feel. So, this was torture. I also had new teammie, Anna, to my left who mentioned how nervous she was. So I fixated on getting her to calm down and just go with her instincts (b/c she has excellent race instincts)…which in turn got me to refocus.

After sitting on the line for nearly 10 min, the whistle blew and we were off. I had one of my best race starts…ever! Even though I wasn’t clipped in, I was out in the front leading through 90% of the first lap. I knew the race would start fast; it’s a very short course w/four turns. I wanted to be the first into the turns for the first lap in case people grabbed breaks. Success! There was a tiny patch of cobbles just before turn 4, and these ladies would break as they rode over them. This was odd to me, but I also knew this is where I could have an advantage on the final lap.

I focused on staying at the front, never further back than 5th wheel. A variety of women took turns pulling/attacking. About halfway through the race, they announced a $40 cash prime. So, naturally the pace increased and I went with the attackers. Erin (the 4x Ironwoman) and the ISCorp junior went for it…it was close, and I thought they’d stay away, but this was a strong group of women that were fierce and aggressive. I continued to tell myself to not lose one of the fast wheels. I knew the ISCorp junior had a killer sprint, as I had raced with her a few weeks prior. 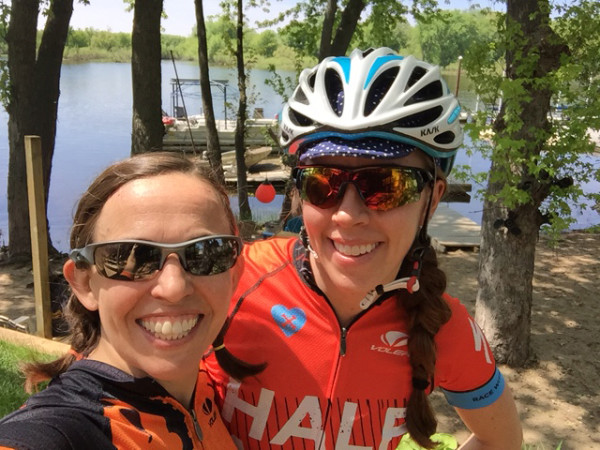 Ashely attacked with about 5 laps to go, and it was really strong. As she got sucked back into the group, I countered, but barely. I was tired and I decided that I wanted to save something for the sprint finish. Then, out of nowhere, Carin attacked with 3 to go. She held it for at least a half lap, as we came across the start/finish, I saw 2 to go. I wanted to counter attack, but knew that would be the end for me. So Erin (the 4x Ironwoman) got out toward the front. She’s clearly strong, but is also new to racing and hasn’t done many crits at all. So, I let her stay out there; the ISCorp junior was right on her.

As we started the final lap, we were strung out. The ISCorp junior went for it with half a lap to go. I was too far back to go with her, so I sat about 4th wheel through turn 3, accelerated over the cobbles through turn 4. I came out of the final turn probably 3rd wheel. I swung far to the left as I got out of the saddle in my drops and sprinted with every ounce of my being. I nearly saw blood in my eyes, but I could feel everything falling into place. I was gaining ground very quickly. Another rider (Rachel) was just on my right, we touched hands, but I kept my focus on winning the field sprint. I wanted it so badly (which would mean 2nd place for me). I outsprinted the field, and knew I locked up 2nd, if not first (couldn’t remember if the ISCorp junior was registered as a junior or a cat4). I took a few cool down laps, had some friends there from xXx that came over to congratulate me, as well as some teammates parents/families. I was proud of Ashley and my teammates for attacking and having 2-3 solid days of racing. I was also really proud of myself for being more conservative, reading the race well, knowing where to be and when, and saving my efforts for that last sprint. I’ve been putting a lot into my sprints on the trainer, and on group rides, and it most definitely paid off in this race. In checking the overall omnium results, I was surprised to see I placed 7th (and that was without the TT on Friday). I’m so close to that top step I can taste it…hoping for that place next weekend at Elgin! 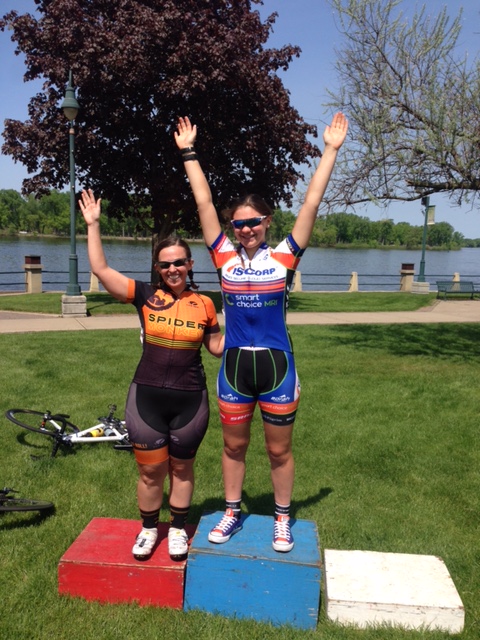