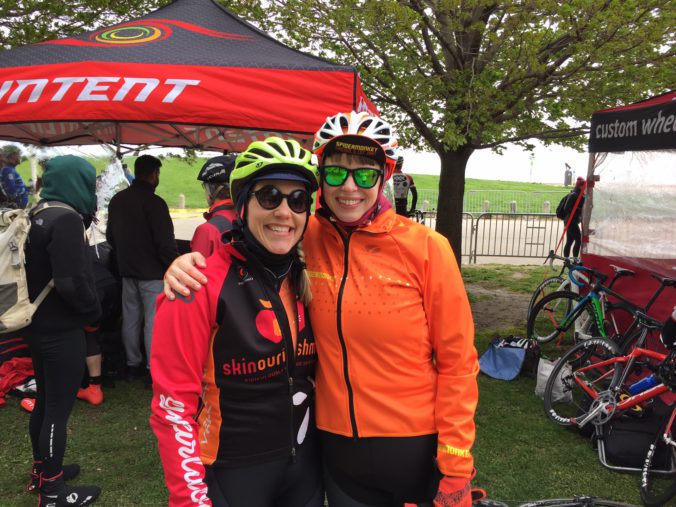 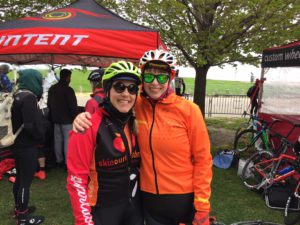 After spending the winter off the bike and rehabbing my knee, I was both eager and a little apprehensive to try racing again. Being new to all things racing, I was taking in everything I could from those around me.  All the tips, advice, experiences, insights…I wanted it all. During an evening of Spidermonkey drinks, Anna Affias convinced me that Lincoln Park Crit should be my first race back. So I signed up.

The morning of the race, I rolled over, head full of excited, nervous energy. Obsessively checking the weather forecast, it appeared that the rain would hold off for my race. The frigid wind would not be so kind. As we lined up at the start, we all stood shivering and impatient to move. Timidly, I hung back in the second row, but was motioned forward to fill the front gaps. With a thumbs up and a knowing nod to Anna, I was ready to go. As the whistle blew and we started rolling, I remembered the words of Sarah Rice and pushed hard off the start. To my surprise, no one else did. The group ambled around the first corner, everyone jockeying for the places they wanted.  What place did I want?! I had no idea. Trying to remember all the things so many teammates told me about criteriums, I felt a little lost and just decided to follow the flow. 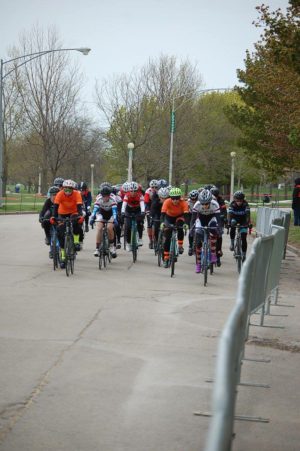 Through the first few laps, I kept waiting for that surge of speed, but, surprisingly, it was more of a slow, steady build. I found myself pulling hard and at the front of the pack, with my brain protesting, “this isn’t right, you shouldn’t be up here!” I tried to slow my pace, move over and back into the fold to preserve my energy. I was finally getting hang of things: stick with the group to hide from the wind, come off strong after corners, and everyone will hit the wall of wind at the final corner, slowing the pace. Lap after lap, it went like this; corner, catch-up, sprint, corner, 180, catch-up, sprint, and on and on. I felt strong, jittery, a bit bewildered but I was with the lead group.

At some point the official called the prime and I had no idea what he said. “3?”, I thought, totally confused.  So I stepped up the pace, thinking that we were in the final stretch. I clearly had left my reason and sense of time in the tent. A few laps of this, realizing my mistake, one word entered my mind: matches. I was steadily burning through those matches that teammates had told me to be so diligent about. I backed off the pace, still hanging in with the lead pack. 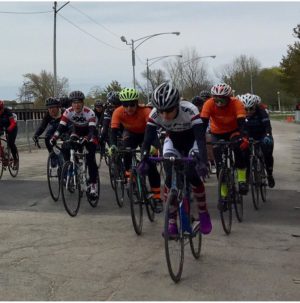 It was as if Anna saw this realization and took a spot right next to me to block the wind and give me a chance to collect and count those precious matches. Once we were nearing the end of the wind tunnel, a xXx girl attacked and Anna chased her down. I kept my pace steady, still collecting myself. I grabbed the wheel of a xXx girl and hung on for a stretch. She called to me to work together and as I kept pace and moved to the front, I dropped her. Feeling comfortable with my pace now, I just kept pushing. Alone and smack in between the lead pack with a group behind me, I settled back into the routine:  corner, sprint, corner, corner, 180, sprint, corner, wind, repeat. The cheers of the spectators, including those brave, half-frozen Spidermonkey’s who came out just to support kept me pushing through the wind. During the final lap, as I approached the 180 turn, Anna was on the other side of it, chasing down a Psimet girl. In her contention for that top step she was pushing hard into the wind, lighting those last matches. Still alone but inspired by her strength, I lit the few I had remaining and crossed the finish line, 11th out of 30. I was exhilarated and anxious to talk through what I just experienced. Knowing there was a lot happening on the course that now, in context of having the experience, I would be able to better understand the advice, tactics and strategy.  As I rolled off the course and glanced up to see the lap counter that I didn’t know existed. I laughed heartily at another crit-lesson learned.