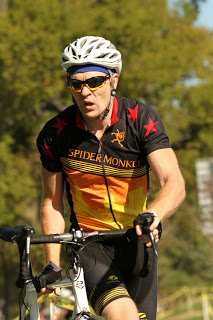 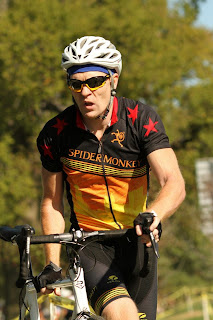 After nine long months of riding trainers and road bikes, the opening day of the Chicago Cross Cup (CCC) was finally here.  On a beautiful warm sunny Saturday in September 12 Spidermonkeys lined up ready to kick butt and take handups.  It was a full day of non-stop action starting with Geoff Scott racing in the 40+ at 8:45am to Kelly, and Mike Meyers muscling their way through the 4B race late in the afternoon.  All the other usual suspects were to race; Kim Brokohf, Kristi Hanson, Ken Mitchell, Stewart Chapman, Mark Z, Hayes, PJ, Aaron Brynes, Trent, Kyle and Katie Kolon.  Tons of other Spidermonkeys made the trip down to the southside throughout the day to take photos, heckle, give out s’mores handups and drink beer of course.

I raced the Masters 30+ in the AM with Hayes and PJ lined up nearby in about 4th or 5th row back.  The race was fast and lasted about 7 laps.  I dropped my chain twice and had a couple of minor mishaps and ended up in 25th.   I came into the race with minimal expectations and was very happy to score some points and get a better starting position the next time I race.  Now I had 4 hours until my target race, the Cat 4A race.

The time flew by talking to friends, watching racers crash, and of course heckling.  When it came to line up for the 4As race, I had a pretty good spot on the left hand side in the second row.  This placed me out of the way of the huge divots, potholes and manhole that cause mass chaos in the earlier races.  I got a pretty good start and ended up taking the first turn in about 5th or 6th wheel.  Right off the bat, Brian Witry from Rhythm Racing took off holding a 5 second gap on the rest of us chasers.  During the technical twisty section I would pass one or two riders and soon there were just 3 of us at the front. Having raced in the morning and taken a few practice laps since then I knew what lines to take and where I could rest and save some energy.    Witry was slowly getting away, but I just hung on to the wheel in front of me until I could pass him near the barrier section.  Finally it was just Witry and I with about a lap and a half to go.  The back half of the course was Spidermonkey Alley chock full of screaming teammates that got me pumped up every time I went through.  I finally passed Witry just before the uphill barrier and now just had to hang on without puking for less than a lap.  I rode hard, but tried to keep it in control in order to avoid a crash or dropped chain.  With the finish line ahead, I finally could breath a sigh of relief and celebrate my first bike race win ever!

Thanks to all the Spidermonkeys who showed up and cheered for all of us to go faster, it made a huge difference.