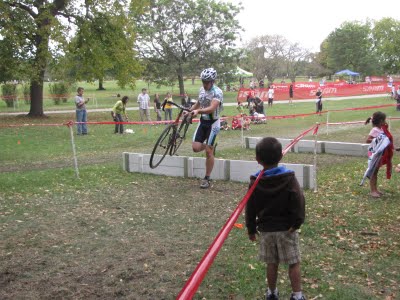 Hey Spidermonkeys!
So I did my first cyclocross race yesterday at Jackson park (thanks Lynn for coming and cheering me on!) and had a great time! It was so much fun! I had a slow start and had to run through the sand pit/baseball diamond on the first lap because the women in front of me were riding too slow through the dirt. I was able to pass a couple of them on foot. Once I got back on my bike and went around a turn, I almost wiped out because I used my back brake more than my front brake, this was also when I realized my front brakes wer
e rubbing. I then stayed behind a couple women into the winding turns around some bushes and trees and once the course straighted out I was able to pass them. I then rode with Jannette Rho for a lap or two and we passed a couple rides together. I lost her a little before the beginning of the last lap and was riding alone for a while but I felt strong and caught one ride nearing the end of the final lap.
I was passing women the whole race and had way too much energy at the end! I finished in the middle of the group of 27 women and was really happy with my first race. I can’t wait to do it again in a few weeks! I borrowed a bike and am ready to get my own cross bike!
Katie

Here’s my race report:
Jackson Park was also my first cyclocross race ever, it was great! I raced the men’s 4b race at 3 pm. Alex Tweedie, Dave Cushman and Matt (last name?) were also riding that day and were sporting their RVB kits. We pre-rode the course at 2 pm before the men’s 4a race and got a good feel for the twists and turns of the relatively technical course. Unfortunately, I didn’t get to practice on the barriers so that added a little to my mounting nervousness. At the start I lined up as close as I could to the front, but only managed 3rd row, out of 76 people though, maybe that wasn’t too bad. Dave Cushman was right on the line (lucky bastard) and after the start he said he was the 2nd person to hit the sand section. I was not so lucky, I ended up somewhere that seemed like 30th spot and 3 guys fell in front of me (and everyone else) right before the sand section, I was able to pick a line through them while others road right over them. Thus ensued about 30 minutes of max heart rate effort, at one point I looked down and saw 200 on my heart rate monitor, uh-oh. I was slowly picking off people in the turns (I think my mountain biking skills really helped on this course) and even on the two barrier sections. As nervous as I was before the race about the whole mounting and dismounting, I didn’t even have time to be nervous while racing, you just did it. Jump off the bike, jump over the barrier, jump back on the bike. Pedal, pedal, pedal. Repeat. By the 2nd or 3rd lap, things were pretty strung out, I couldn’t really tell who was in front of me and I knew there was a group behind me, but I was able to keep some distance from them. I ended up finishing in 15th place. Cushman was in front of me (I didn’t even see him after the start) and he got 9th! Alex and Matt finished just a little further behind me.
Lessons learned:
– Start position is key.
– CX races start with a sprint.
– Bike handling and proper cornering technique really help maintain momentum and lower energy usage.
– Constantly scan ahead to determine gearing (i.e. if in a corner heading onto pavement, shift while in the corner and get out of the saddle once you hit the pavement).
– Pass strategically (i.e. if in a twisty section start the pass on the outside while accelerating and squeeze on the inside on the next turn).
– CX is a blast!
Thanks to xXx racing for hosting, great race!
JPC 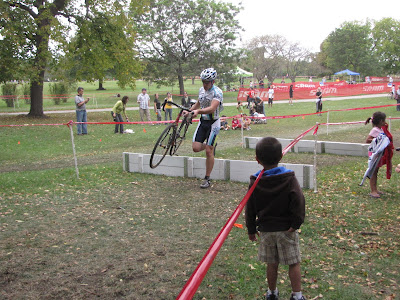 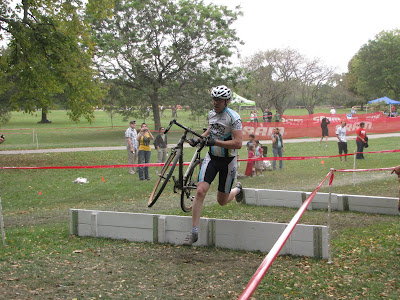 Yes, that’s me, suffering. Thanks to Chris Strahm for taking the pictures! 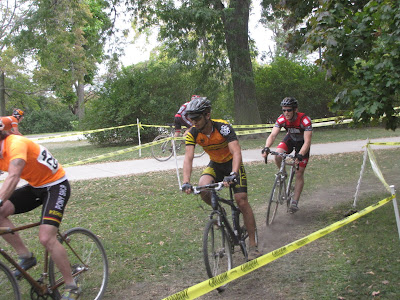