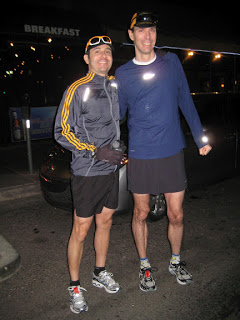 Finishing is Winning by Dean Okun

Looking back, the reasons I decided to run a marathon are somewhat fuzzy. It was clearly a snap decision.  Pretty sure I just opened my big mouth and said something stupid like “anyone can run a marathon”.  Problem was, several people heard me say that, since I was on a Spidermonkey Saturday ride.  One of those people was Josh Green, who I believe then said, “if you do it, I’ll do it”.  Now who’s the idiot?

I wish I had good reasons, like a desire to challenge myself, to do something out of the ordinary or to find out whether I had the courage and stamina (both physical and mental) to accomplish it.  I think I just wanted to get a cool medal and one of those oval 26.2 bumper stickers.  I had no idea the journey I was about to start….but thankfully I had Josh with me!

Having Vanessa in my life has many benefits, especially when it comes to having a running expert in your corner…and one of the most encouraging people I have ever known.  She was so excited when I decided to run a marathon.  She put a training schedule together for Josh and I, gave us advice on everything from where to run and how to dress.  By all accounts Vanessa is an expert marathon runner.  Having run Boston twice and fourteen marathons in total…she knows what works and what doesn’t.  We were in good hands.

Josh and I decided to run our short runs (tues, wed, thurs) on our own, and do our long runs on the weekend together.  Our first run together in the 18 week training program was a 5 mile run!  We ran 9:15’s and couldn’t believe how far 5 miles was!  I had been running the Burger and Beer fun runs with Universal Sole and ran a few 5K runs, but I had not really run more than 200 Yards (yes back in high school it wasn’t metric yet) in 30 years. My body protested loudly: Joints popped, muscles squealed, tendons frayed.  Being a cyclist was not helping!

After our first double digit run together, Vanessa made pancakes for us. The following week, Stewart treated us to Lox and Bagels! (the bagels were even cut into stars of David, just for me :)).  We were so lucky with the Chicago weather, we thought most of our runs would be in the cold and snow, but the weather was amazing.  I would suffer on the 15 mile run, Josh did amazing.  Josh would suffer on the 16 mile run, I smiled the whole day.  We helped each other through the bad days.  We both suffered through the 18 mile run.  And then anxiety set in.  “How am I going to run 26.2 if I could barely make it home on the 18?”.  Advice and encouragement came pouring in.  “Trust your training and the power of the taper!”  Josh and I did the work, over 250 miles of training!  I lost 8lbs…Josh couldn’t afford to lose any weight!!!!  The training was hard.  It took away time from many of the things I love, like riding with the Spidermonkeys on a warm day in December and lifting weights at the Lakeview Y (my home away from home).  But we did it!  We were ready!!

With a delicious pasta dinner in Phoenix behind us, we got to bed early.  Tomorrow would be a big day!  Stewart and Vanessa dropped Josh and I off one block from the start line.  Crowds, music and it was 50 degrees out!  The day was finally here.  After a half hour delay, we crossed the start line with the 9:30 pace group.  We trained at that pace and faster, so we felt confident to try to stay with them.  We were excited to be running with so many people as most of our training runs were very lonely. This was exciting.  Vanessa and Stewart had laid out a plan to see us at mile 4, 13, 19 and the finish.  Every mile there was a band playing, water stop and cheerleaders.  It was perfect.  Mile 4 was so exciting!  Mike and Rebecca were with Stewart and Vanessa cheering!  Dressed in Spidermonkey gear, holding bright colored signs, they were easy to spot in the crowd of people.  We shed some extra clothing, gave and got some hugs and kisses…and away we went.  At mile 5 it all started to break down for me.  A CRAMP in my abdomen.  I’ve had them before on training runs and can usually work through it in a mile or two.  Not today.   At mile 12 I had to do one of the hardest things I have ever done…ask Josh to leave me.  I needed to suffer alone and I was slowing the pace down drastically.  I didn’t want to hold him back.  He asked if there was anything he could say to help me…I said no.  I then said, “don’t worry, I won’t quit!”.  Off he went.  Ricky Bobby, my wingman was off…I would miss him.

Vanessa was anxiously waiting for me at the halfway point.  Concerned that I was not with Josh.  I was walking when she saw me.  I was struggling, both mentally and physically.  Having a cramp caused me to slow my pace, causing me to run differently, causing blisters on the balls of my feet.  Everything started going wrong.  I was now in a mental battle with myself.  I broke down in tears when I saw Vanessa.  The frustration of having trained so hard and having such a hard day was difficult to handle.  Vanessa used everything in her arsenal of encouragement to help me!!!  I finally turned to her and said “I hate you!”  I hate you for knowing me better than I know myself.  Knowing that quitting was not an option.  Knowing that pain is temporary and quitting is permanent.  I went on! I can’t explain the feeling really.  It wasn’t pain. I felt numb from my knees, up through my legs.  I couldn’t tell you how I was still moving, but as Vanessa said, “just keep moving!” I have never been in such an intense, psychological battle with myself in my life.  I just kept telling myself what Vanessa said “just keep moving”.  You can stop forever once you cross the finish.  And NEVER run again.

Vanessa must have been so anxious after seeing me like that…and would now wait for me at mile 19.  As I turned the corner at 19, I had a smile on my face.  I had worked through the mental battle and visualized myself crossing the finish line and getting that AWESOME medal.  And my blisters had EXPLODED (this is a good thing). She was so relieved.  I continued to try to pick up my pace, but each time I did, the cramp returned.  So I accepted that I would not hit any sort of time goal and simply concentrated on finishing.

I ran across the finish line with fists pumping and screaming with joy!  I was humbled and hobbled.

The best part of the day wasn’t actually finishing the race; it was finding Vanessa, Josh and Stewart at the end, waiting for me.

Completion!  Completing a marathon has taught me what I am made of…and the result is comforting!  I may or may not do that again, but I will always cherish the accomplishment and the journey (with Josh).

Spidermonkey of the Week – Derick Adame

Spidermonkey of the Week – DJ Ryan