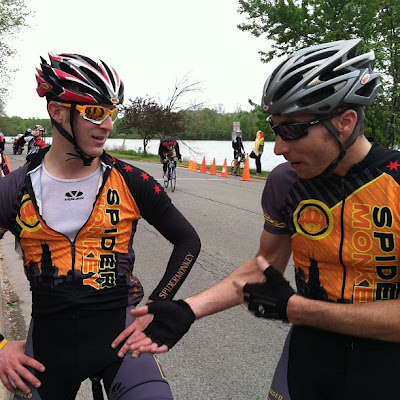 Brandon convinced me to do the Easter ride and race Cobb Park.  The Easter ride was a blast, but by the time we toed the line for the race we had 70 miles in our legs.  The race was 45 minutes and from the gun a Burnham rider went off the front.  Brandon and I made a couple of attempts to bridge to the front until Brandon was able to get in the break.  This may have been 10 minutes in and I thought my legs feel good, but I am sure they will give out at some point.  The break started to swell and I followed a wheel all the way up.  Brandon was surprised to see me up there, but was happy to have another person rotate through because the break had about 8 or 10 guys, but only about 3 or 4, including us, were working.
Due to the lack of cohesion, we were caught by the field.  Three guys were off the front again so I made a couple digs to try and get to the front.  Finally, I was about 3 or 4 seconds behind the lead group of 3 when another guy came up to me and finished off the gap.  The five of us worked well together and were joined by 3 more.  Our lead continued to grow to 25 seconds, and at about 30 minutes in, I told myself that my legs could survive for another 15 minutes.  I had never been in a successful breakaway, and really wanted to make it to the end in front of the pack.

One of the best parts about racing is having people cheer you on.  It was a blast having Stephanie, Kristi, Kelly, Ken, and Geoff cheering us on.  It gives you that little extra energy when you come around and see them.  Plus, when I feel good, I have fun making hand gestures and faces at them!  You can ask them about that.  Another good thing about racing is enjoying those days, when your legs will do whatever you want them to.  Cobb Park was pretty close to that.  My breakaway stayed away and I managed to take 6th in the sprint for the line.  Brandon was able to sneak off the front with a Burnham rider as well and take 11th.

We finished the day with 92 miles in the books and a lot more confidence in our fitness.  I am glad he convinced me to do both rides.  The rest of the afternoon and evening were spent eating and groaning whenever I moved until I went to bed at 9:30.
-Drew
Official Spidermonkey Participant List:
Kelly Clarke
Brandon Diffenderfer
Tim Driver
Kristi Hanson
Drew Kushnick
Stephanie Kushnick
Ken Mitchell
Geoff Scott
Full results

Monsters of the Midway Race Report