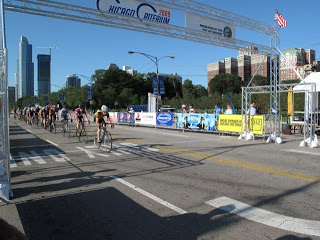 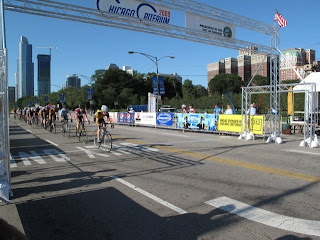 Todd Kaiser, Andrew Zens, JPCastro, Tristan Whitehead, Samuel Winn, Josh and I (Bryan Witry) clipped in at 8:10 for the Cat 5 race and weren’t heading out for a Sunday stroll on a beautiful Chicago morning. The team looked remarkably focused as we sat in the sweet new 312 tent and pinned our numbers on our jerseys. The plan was to control the race and set up a train for the final sprint, I was the Monkey to reap the benefits of an all out Shake and Bake.

Todd set the tone at the top with monstrous pulls and traded duties with a few riders; he would remain near the front the entire race. I was shepherded around the top 8 of the pack the entire race by Andy. Truly selfless performances by the both. The race was crash free, everybody loves a safe race. But everybody also loves the entire team in the front of the race! I saw every Monkey in the front 10 in the first few laps. Actions like those really set the tone of the group. Sam, Castro, Tristan, and Josh all had smiles on their faces when they were zipping around Michigan Ave listening to the back-side announcer constantly mention Spidermonkeys (I couldn’t see Andy and Todd because they were in front of me the whole race, probably smiling though).

No primes…. total crap…. at least throw us a friggin’ water bottle, right?!

As we slammed down the front stretch with one lap to go, everything seemed to fall into place. Castro came scorching by and everybody followed suit. It was as if Merril was starting the fast section of the Wednesday night ride and everybody fell into a perfect line. JPC pulled hard and immediately 5 Monkeys were in the top of a strung out field. He peeled off and said something like (I’m spent/tired/dying?) and I laughed to myself because I couldn’t get over how awesome it was that someone had just sacrificed himself for the team. Todd slammed the corner and Andy took over around the chicane leading Todd and myself with 2 corners to go. A few guys jumped hard around the second to last corner and I jumped their wheel up the last lil kicker. The mini-group hit the downhill hard and we all maintained position the last 200 meters finishing all within connecting bike lengths. I finished fifth, without my team I would have finished last. The Spidermonkeys displayed some serious tactics, a testimony to the hard work thats been put in on the route to HP.

Anybody who doesn’t enjoy a good cheering section can kiss my ass; Spidermonkeys have the best cheering section ever! We all heard cheers every lap, and saw so many people after the race. Everybody who came this weekend, THANK YOU! I was unable to hear Dean on stage during the race, but I imagine he made the sponsors proud. I was proud to be a Spidermonkey today. Not just because the entire field united themselves and sacrificed themselves for one teammate, but because everybody carried themselves with class. On that note, everybody who raced is entitled to a few classy highlifes this Wed night ride from Bryan!!!