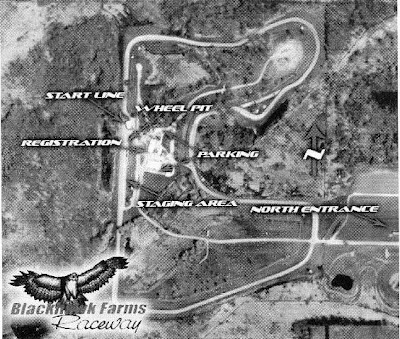 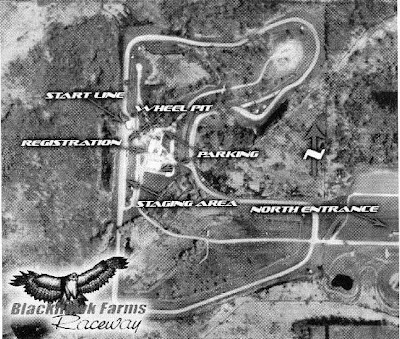 The course at Blackhawk Farms Raceway

The Burnham Spring Super Crit is a huge event for Spidermonkey Cycling, because we co-host the event and support the race with volunteers. As a result, we usually have the largest cheering section among any of the teams out there. It’s always a ton of fun and a great way to get the race season started.

This year, we have collected a series of short race reports from some of our teammates.

Being the second only Criterium that I have participated in, I certainly was nervous about getting hurt. My years of MTB riding, and 10 years plus of road cycling, I feel comfortable being on a bike and racing in a pack. But just like riding a bike in city, its not yourself you have to worry about, its the other drivers.

The course quickly put me at ease with plenty of room for 4 to 6 abreast and lazy turns where typically little speed would need to be scrubbed. Unfortunately, the 4/5 races, braking was applied by many nervous nellies…

My goal in the Cat 4/5 and Masters 4/5 was to stay with the leading pack and finish near the front of the field. I had been away on business all week and was feeling flu like that morning. I took 18th in the 1st race and decided in the second to try for better finish. I fought to stay in the stem of the cherry with little success. Obviously, that is where everyone wants to be on the last lap. So after getting knocked off the wheel in front me several times…I concluded to just burn myself up and make the field work to stay with me in the last 1/4 of the finishing lap. I successfully stayed on front till the last turn. Then of course the field blew by me and I ended up crossing the line in 40th. I knew that would be the result, but also knew I wouldn’t podium, so figured lets feel what its like on front pulling the peloton around the track.

The experience was terrific! What a neat place to race! I would certainly go back!

The race was fast, but at the same time quite conservative, no attacks, or teams dominating the race. As the race went on, it appeared as if it was going to be a sprint finish. Having raced the cat 4/5 race an hour prior, I knew I had to position myself well. But unlike the previous race, no one made any attack until the absolute last straight away. By the time the sprint came around I found myself boxed in. The guy ahead of me did a great job to pull me into 16th, but I didn’t have anywhere to go to sprint around. I need to work on positioning…. (lesson learned)

This was my 2nd time racing the super crit and I really like the course because it’s not technical, which is good for me! The Women’s 4 race was 5 laps and they were pretty uneventful, I pulled at points just to stay warm! The pace picked up with about 1/2 of a lap to go and the two girls from Cutting Crew were at the front. The field was together until around the last straight away (about a .25 mile I believe) when it broke up. The two girls from Cutting Crew took 1st and 2nd, ex-spidermonkey Vanessa took 3rd, a girl I rode Little 500 with took 4th, I took 5th, Kristi finished in 8th, and Stewart in 12th. It was a fun first race of the season for me and great to be on the start line with other Spidermonkeys! 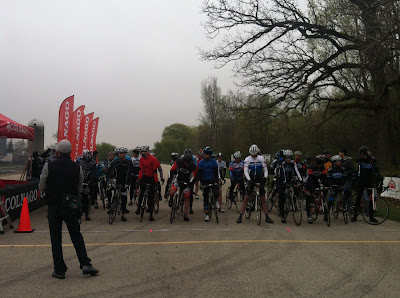 Start of the Men’s Cat 5 race

This is not my first race, but it may as well be, since I last raced a few races 15 years ago. My experience then and at the Burnham SSC was not knowing how to approach the typical final sprint of a criterium and my results speak to that. However, what I enjoyed most was mixing it up with the pack during the race, taking a turn on the front and something new…..I felt like I belonged to a team. Even though I didn’t know most of my fellow Spidermonkey racers, I felt a connection with them during the race. When a fellow Spidermonkey was on the front trying to push the pace or bridge a gap I was motivated to do what I could to help, even if I had nothing left in my legs. I completed 3 races at the Burnham SSC and loved each of them.

I was tired Saturday morning. I didn’t have the brains or the energy for heroics. I decided to just do whatever Kristen Meshberg did. NOTE TO SELF: THAT’S A VERY GOOD PLAN. Racing with Kristen was like dancing with Fred Astaire: she was in the right place at the right time the entire race. She was so good that she made me look good by association. But it goes without saying that we looked good. We were both wearing Spidermonkey kits.

We attacked the start hard, as planned. We had a gap in the first turn, but it was a small field of very strong riders—Anne Meyer, Erin Woloszyn, Skylar Schneider, Daphne Kariganis, Lindsay Durst, and others. They caught us right away. Kristen went for the first prime. I didn’t have the legs to go with, so I blocked. She dangled off the front, got more space, easy did it, till she had a 15 second gap. I let her inch forward a little at a time, and the pack wasn’t chasing. Someone asked me if I was going to close it. “Hell no. We’re teammates.”

I should have lied.

30 seconds later, Erin Woloszyn charged and caught her. The whole pack came back together, but now we knew that Erin’s would be the wheel to mark at the end. The attacks followed a pattern. Erin Woloszyn jumped first, then Skylar Schneider, Anne Meyer, and Lindsey Durst, all in a line. Repeat.

We decided to get them to go early and ride their wheels through the long sprint to the finish. On the final corner, the Durst/Meyer/Schneider train was on the outside. Erin Woloszyn blew past them on the inside with Kristen on her wheel and me on Kristen’s. Kristen pulled around Erin’s right at the same time as I pulled around her left. Whoops! We should have taken the same side, but we’d never coordinated a lead-out move because we’d never ridden together before! I went all out, trying to get in position to lead out Kristen. I was almost there and told her to get my wheel, but she couldn’t get over to me so she just held on. In the end she was out in front and moving so fast, I caught her wheel and stayed on it till the end. Definite room for improvement on finish technique, but 1-2!!!! 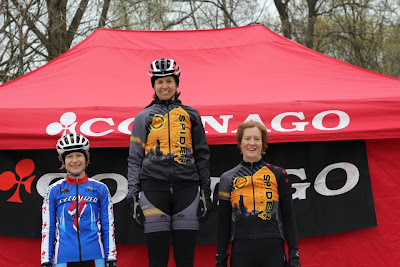 Kristen and Sarah on the podium

Went to the line in the women’s race with my new teammate Sarah Rice for the first time. We had a small field but it was actually bigger than we’d expected, with some really strong riders present. Sarah and I got to know each other and raced together really well! We got every prime and went 1/2 in the race! Confidence boosting for the both of us!! Then for more training and another chance to race together we jumped in the men’s 30+ field finishing safely with the field.
See Kristen’s full race report here.

Vanessa Buccella interviewed Kristen and Sarah after their race.

Cat 3:
I lined up for this race not looking to get some speed in the legs. 2 or 3 laps into the race I took a short pull on the backside of the course to test my legs, and they didn’t respond like I wanted, so I pulled a Nate Iden and tailgunned for the remainder of the race. The only difference between me and him is that he finishes better than me. Two laps to go I decided it was time to move towards the front, albeit with the rest of the pack which made it difficult. I was sitting on two ABD wheels during the last lap when I was shuffled back between corners 3 and 4 and couldn’t recover in time to factor into the sprint, although I’m doubtful that would have made a difference.

Cat 1/2/3:
Wow, that was fast, 27.6 mph average over an hour of racing. I’ve never easily pushed that big of a gear before. After 20 minutes of racing, Andy Daley looks at me, recognizing how tired I was, and says “Don’t worry, the break will get away and we’ll slow down.” There was one thing I learned during this race, don’t ever listen to Andy Daley. While I was hoping his words were true, the pace never relented and the break still managed to get away. Excitement took over in the pack as the break was getting reeled in in the closing laps, and I have to admit that I was a little excited to watch this even though it wouldn’t affect me one bit. Three riders in the break managed to hold off the field sprinters even though the pack was barreling down on them in the final stretch. This can be seen at the 6:30 mark of this video.

This was my first year racing at Blackhawk Farms and I’m excited to go back next year. A big thanks goes out to Burnham racing, especially Eric Goodwin, for putting this event together and to all of the Spidermonkey and other volunteers at this race.

All in all, this was a great event at a great venue. Many thanks to all who came out, raced, volunteered, and cheered! Also thank you to Mrinal Shah, Jason Knauff, race director Eric Goodwin, and Burnham Racing for all of your efforts to make this event happen. Can’t wait for next year!