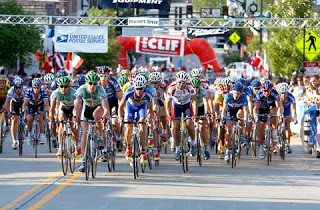 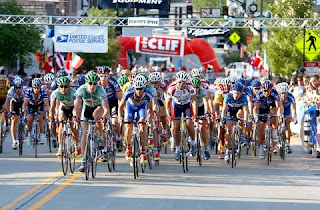 Today was the USA Cycling National Championship criterium race in Downers Grove, IL. The course was a textbook technical crit with 8 corners, a climb, and a beautiful Chicago Suburb setting. All the major players showed up for the 3/4 race slotted for 45 min + 1. Rider registration didn’t hit the maximum, but 153 racers creates a sweeping spectacle that stretched from turn-to-turn.

With a technical course and fieldsize like today’s, a good starting position is imperative; I slotted myself near the course entrance with 20 min left in the previous race. They called us to the line and I managed to be in the front on the left-side. Theeeeeeeeen the official dictates a mandatory pre-lap before we start. Some riders bitched and attempted to refute the officials request–I didn’t want to sacrifice my good position, so I followed suit–and watched a herd of riders start to take their lap. After a not-so-pleasant exchange with the official, we were forced to take our lap and boom, i was in the back row of the start…..brutal.

With my recent upgrade to the 4s, I was apprehensive about testing the waters of the Cat 3s. But a fellow JJPeppers fan and recent Glencoe Grad Prix Masters 1/2/3 winner Jason K (Burnham Racing) was nice enough to give me some words of encouragement at the beginning of the race near the Port-a-John: “I’m gonna work your ass today”

The pace started fast and the war of attrition began on lap 1, riders were constantly being dropped. I did everything I could to move up on the climbs, take a few spots on the descent, grab a wheel during the front stretch, and it just wasn’t enough. I was dangling off the back of the pack or chasing to catch a wheel after every burst that came from the front.

When the announcer proclaimed ‘8 to go,’ you could feel the group turn on the jets. As I crested the climb with 7 to go, I couldn’t match the intensity of the group, POP, and proceeded to get the ‘we’ll see ya’ sign from the official and watched the final laps from the sideline of turn 8. When all things were said and done, I had survived the war of attrition better than half of the field…when i got dropped it looked like only 60-70 riders were with the group.

The cheering section rocked, as always. Andy, Trent, Jake, Keith, Keith’s wifey, Katie, what appeared to be some older father figure looking dude with Katie (i don’t know, i was dying out there), Chip, and Ken’s wifey: THANKS!!!!

Until next time, I love bike racing…
-Bryan Witry

Quality mustache of the month ..