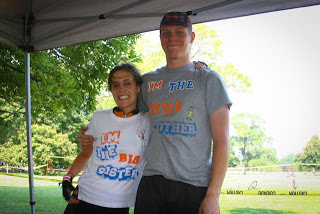 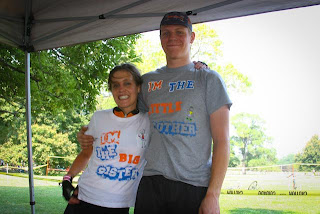 It’s been said that the best part of a ‘cross race is the end. Well in a relay ‘cross race you get a little taste of the end after each lap, which was great because I needed it!! Kristi Hanson, soon to be Spidermonkey and I did the women’s open race. We got off on the wrong foot, quite literally, when i was chosen to do the Le Mans start instead of her. She’s the triathlete after all! But it was all for fun anyway.

The course was a BLAST! You got off to a fast start on pavement, then some twisty turns and over a barrier to a straightaway (with some deep ruts cutting across it) to a sharp decline that would lead you into the lake or the lap of a Chicago Cutting Crew Heckler if you weren’t careful and that was just the first half. After making it past the cutting crew couch there was a slight hill with a barrier in the middle, a ride down LSD, then more sharp turns, through a little wooded section and straight into…wait for it…the toilet bowl of death. I don’t know how they did it but xXx managed to create a route which you “swirled” in one way, kinda did a U-turn and swirled out the other. Until it gets cover with snow, that particular piece of Jackson Park is going to have a it’s very own crop circle confusing passersby. Each time i was done with my lap i was BEAT! But by the time Kristi got done with hers i was excited to go through it again. We had plenty of monkeys in the mens’ races including Mike Shea, Ken Mitchell, Geoff Scott, and Chippy who needs no last name. New monkey Monica showed up to be a part of the cheering section and just see what this crazy ‘cross stuff was all about.

Saturday, I stayed up extra late to get the most important piece of gear ready for the co-ed race, Tee-Shirts which said “I’m the little Brother” and “I’m the big Sister” for Chase and me. They were a hit. I was really excited to see Drew and Stephanie show-up to represent the monkeys as well. This race was shorter so Chase and I only raced 3 laps a piece. He was stoked that he was able to stay on Ted Ramos’ wheel for his whole first lap. I was stoked i didn’t vomit or pass out on mine. All in all i am SO GLAD i went and can’t wait for Sept. 19th!

Here are the final results for everyone:
http://www.usacycling.org/results/index.php?permit=2010-1883