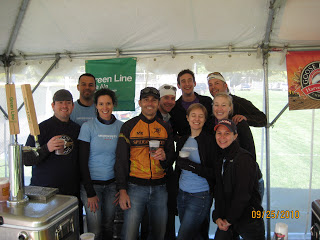 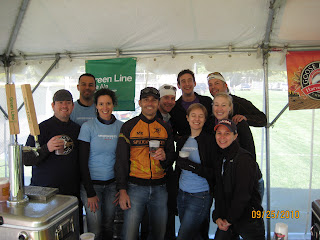 Saturday! What a turn out for Wildcat Alley! After pouring lots of yummy Goose Island beer (great variety this year, including 312, Honkers, Green Line & Harvest Ale), 8 Spidermonkeys took our $325.00 in tips and ate $68.00 worth of hot dogs and pretzels.  The balance will be donated to our new sponsor MS!!!!
A great showing for the Saturday ride. Of course Castro was late for the ride (surprise, surprise) and caught the group at Northwestern, just before Grace and Ben turned off to pour some delicious 312. Anyways, a bunch of Burnham boys showed up, but pace was casual with some pickups along the route. Hyde Park Grant (new guy) held on for the most part with a big grin on his face. Other new guy Peter “hid under the porch with you guys at the ms ride” was near the front the whole time. At the coffee shop they picked up some Half Acre people for the ride home.  On Damen on the way back in, Kim must have seen something really interesting on the ground and fell over clipped in at a stoplight. Peter must have seen something similar and fell over at the next stoplight. Both exhibited good form and were all grins getting back up.

Grace and Kristi did some CX practice at Cricket Hill, Castro was supposed to join but slept in instead (surprise, surprise).
Congrats to those who did CX racing this weekend! And big congrats to Stewart who made it out to her very first time trial! Even after the day of pouring/drinking beer, she did great with a 30:29! She said she did it to prepare for the 40 minutes of pain threshold test at Spidermonkey VQ!  Stewart is also sporting a new super cute haircut…what a rockstar!

Spidermonkey of the Week: Josh Green 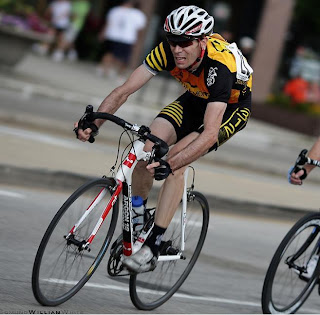 It was inevitable I would end up with the Spidermonkeys. I first starting riding with Dean for health reasons back before the Spidermonkeys were even a thought in his mind. I had ridden some in grad school but fell into a routine of inactivity once I left school. Riding with Dean back then really improved my wellbeing and getting dropped most Wednesday night rides does teach one humility. When Dean suggested I join it was an easy decision to make.
I like that Spidermonkey cycling is a club diverse enough to have century riders, racers , Saturday club riders, tri-athletes, and even … runners and have them all be first class members. You don’t have to be the best, finish first, not make any mistakes, or only ride in race cut jerseys to be in the club you just have to love riding your bike. As someone who got dropped a lot when I was starting out I like the fact that if you’re new and have never ridden with a group before the Spidermonkeys will not only make sure you get to Highland Park they’ll make sure you get back too.
Coming home with the first Spidermonkey kit was awesome. Stewart may deny it but I saw orange envy in her eye and after I did the cheer it was only a matter of time before she kitted up in orange too. That’s the best part of the Spidermonkey’s is how welcoming they’ve been to us both.