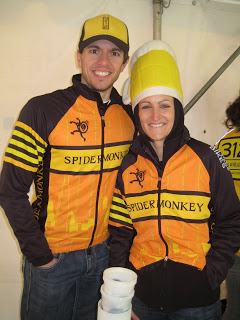 Super duper early Tuesday morning, the girl’s on the Spidermonkey girl ride were seen doing a double rotating paceline up to Tower Road. What? That’s right! We flippin rock. Rebecca’s idea…Brilliant!
We hit a record on Wednesday night for number of cyclists. At JJ Pepper’s that is. Word on the street is out! Other groups are now meeting up at JJ’s to rehydrate with High Life. Wed Sept 8 will be the last Wed night ride. Bring out your “Oldest, heaviest, ugliest” bike, gear, and kit.
Kristi joined us for her first Saturday ride. Perfect day, perfect ride! Several Spidermonkey’s went long on Sunday to help Brianna out with one of her last long training rides. Some are still recovering.

Several Spidermonkeys raced the Ronald Reagan Crit. Matt R wrote “As I looked into the next corner I saw two Spidermonkey jersey’s flying through the turn in perfect position. It was truly a thing of beauty. Our team tactics had worked…or something close to it! Brandon sprinted for a 3rd and Dan came in right behind him in 4th”. Nice work guys!

Congrats to Trent, Paul Decker, and everybody who participated in the Chicago triathlon! Trent schooled it by getting 36/474 in his division. Way to go Trent. Next time, you win!
Chicago cyclocross races kicked off this week in Jackson Park with a relay cross race. Congrats to Lil V and Kristi for teaming up and kicking ass!
Lessons learned this week: Matt R: Avoid Panda Express. Trent: Avoid Gatorade.
Spidermonkey Couple of the Week: Mike and Rebecca Meyers 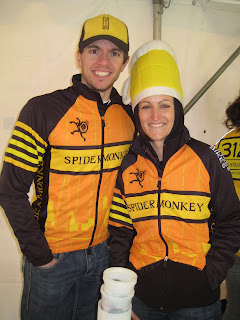 Mike inherited a 62 cm Panasonic bike from the 1970s and started riding along the lakefront with Tom Weiss and Jake Drescher in 2007. During their rides he would hear tales about these long rides to Highland Park with what Mike called the “Frenchies”. They became, in our minds, a group of super fast pro-like riders that we never dreamed we would be able to join. Meanwile, Mike eventually upgraded his bike to a Fuji and Rebecca bought her first road bike, a Diamondback (bet you didn’t know they made road bikes!) and gained a little courage. One Saturday in 2008 after completing the Accenture Triathalon, Mike and Rebecca decided to try a ride with the Spidermonkeys. On the first ride Rebecca showed up in running shorts, running shoes, and cages on her pedals- (thanks for not making too much fun of me!). The group was welcoming and a great challenge every ride. Rebecca and Mike were hooked and soon began planning their weekends around the group rides.
These two Spidermonkeys were married in June of 2010 and look forward to many more rides with this amazing group. Thanks for another great year!