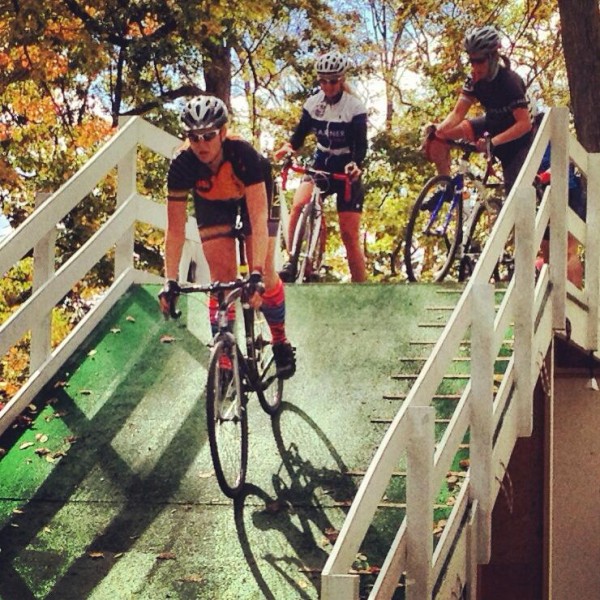 I wanted to race Hopkins Park because it was a course I had not yet done and there was a flyover, which sounded exciting. I drove out with my friend Sara and after getting situated and registered, we took a practice lap. The course was very different from Jackson Park the previous weekend with a lot more stretches to speed up and pass people rather than spinning yourself into delirium via switchbacks. Still, there were plenty of interesting technical parts to suit my fancy.

After cheering on some Spidermonkeys and warming up, I rolled up to the start line where I wound up right next to Liz Farina Markel. We were chatting for a while about how we didn’t understand how some people who had never raced were staged up front and that it was potentially dangerous to have newbies ahead of experienced racers. I still don’t understand how the staging system works, but as irony would have it, shortly after the whistle, I wound up in a pile up, sandwiched between Liz’s bike and my own. I felt bad because I was keeping Liz from going, but I couldn’t get up because my foot was still clipped in and my leg was pinned between bikes, with my body weight holding it down so I asked her to help me get up. She did and raced off and I followed, thinking I need to stay with her because she beat me last week.

Keeping Liz in my sights, I pushed hard to pass a lot of people and relied on my confidence in corners to pinch of several more people and keep inching ahead. There was a stretch of straight asphalt where I sprinted and this was followed by a steep, but short hill. At the top of the hill there were some off-camber turns and a barrier going up hill, followed by a switchback at the top of the hill. Once I made it to the top of the hill, I had passed a significant amount of people and was feeling like my crash at the beginning wouldn’t matter too much. Plus, a lot of people were really slow getting back on their bike after the second barrier. I jumped on quickly and tore back down the hill. At the bottom of the hill there was a muddy portion and a lip between the mud and asphalt that some people had suggested trying to hop so as not to get a flat. I tried to bunny hop this section, but I was not clipped in and therefore did not have much stability and dropped my chain. Shaking from adrenaline, I took way too long to get my chain back on and was passed by nearly everyone that I had just spent my energy passing. (Note: only a couple days later did I realize that I also put my chain into the largest front chain ring, not doing myself any more favors.)

Once again I set out to chase Liz, but also relaxed a bit because I decided I would just do what I could at this point. The course had a lot of wide sweeping turns that you could take at a fast pace, which I did. You first passed under the fly-over, near the monkey cheering section before snaking back around to go over the fly-over. The fly-over was fun and I kept Kelly Clarke’s advice in mind each time to just make sure my front wheel was straight before going down the ramp. After the fly over there was a tree splitting the course near the apex of a wide right turn and it seemed most people took the right side because there was more space, but I decided that the beginning advice of the announcer to “take the left side, but I’m not telling where” meant to take this left side here. It was fine but I don’t know if it was a better choice.

Towards the end of the lap there was a wooded trail that was narrow and very muddy, so usually people slowed down a lot here, but again I took the left side (maybe he meant it here but this seemed obvious?) because it was less sticky and was able to get through this section a lot faster than some. Later on, when passing a junior I advised him to do the same.

At some point in my first or second lap I passed Liz, but I could almost always see her behind me when I went around turns and I used this as motivation to not slow down. I also kept in mind the advice of Kristen Meshberg, or was it Sara Rice, to race the race you’re in. This helped me focus on those around me that I could pick off or stay ahead of and not feel defeated by the fact that I would not be able to catch the people further up who I may have otherwise been racing against. Luckily, at the end of my second lap I saw the two laps to go sign. I was not happy that there were two laps, but this also allowed me to mentally prepare for the last lap. I never used to pay attention to these lap signs, but then again, I always used to get pulled.

I kept sprinting on the asphalt, taking corners fast, and trying to keep going. Towards the end of my last lap, when going over the double barriers on the flat, I saw a toddler that couldn’t have been older than four point at me and tell his dad, “She’s struggling!” His dad hushed him and told him that wasn’t nice. On the other hand, it was probably the best heckle I ever got. Too bad I didn’t have the breath to shout at the kid, “You think you’re so tough, why don’t you try it?! These barriers are half your height!” It reminded me of one of my favorite scenes from Bottle Rocket where Anthony comes back to Dignan after talking to a young girl:

Anthony: She thinks I’m a failure.
Dignan: What? She said you were a failure? What has she ever accomplished with her life that’s so great, man? Nothing.

In the end, I came in 29/43, which is still better than any of my prior seasons. I don’t know what it is but somehow I’m doing much better than my past two years’ attempts. I am not getting pulled, I’m not as gassed, and I’m getting points! I might even be starting to like cyclocross. What is happening?