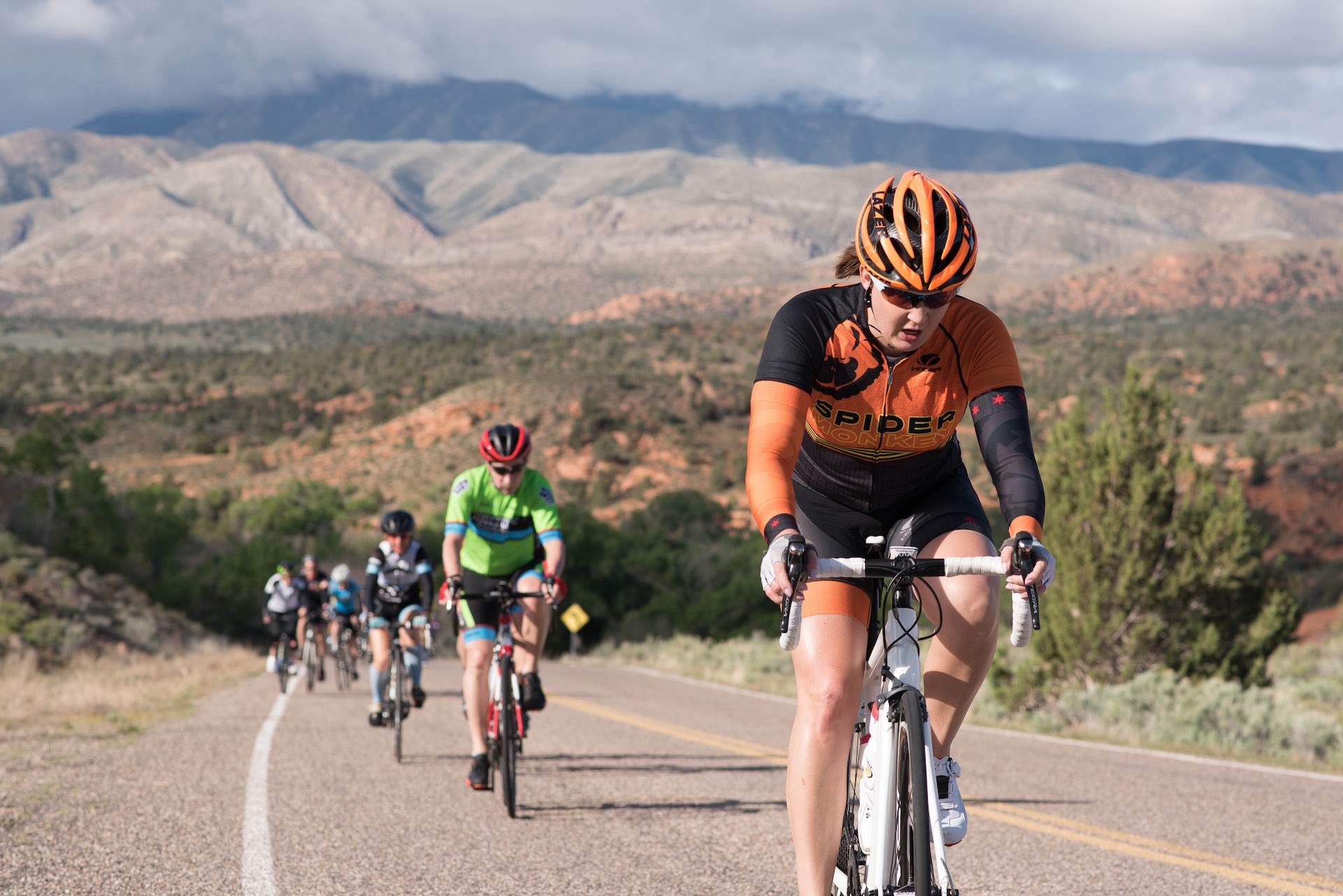 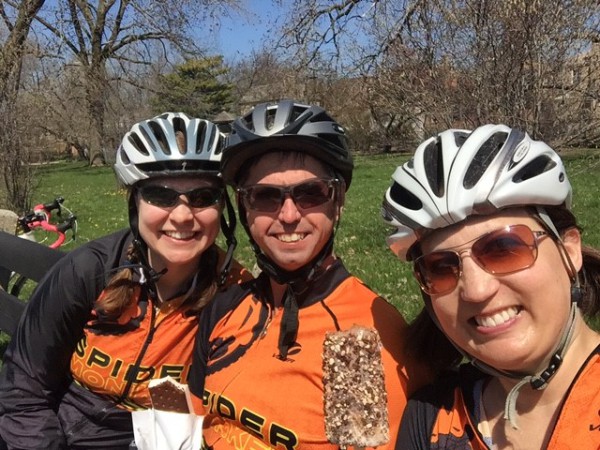 Ice cream rides with friends are some of the best rides!

It wasn’t until well into (alleged) adulthood that I really discovered the joy of riding.

Sure, I rode bikes here and there as a kid – I have vague memories of a Strawberry Shortcake two-wheeler with training wheels that was probably what I learned to ride on, and then there was that time at my grandma’s when I was playing bikes with my cousins, fell on the gravel road and needed stitches in my one knee (which I still have a scar from) – but growing up in the country living on what was essentially a highway didn’t afford me the same opportunities to develop a relationship with bikes as the kids who lived on quieter streets or in town.  As a competitive swimmer, I spent most of my time in the pool anyway so I’m not sure I knew what I was missing.

Fast forward to my post-college years where, like many young Chicagoans who are semi-athletically inclined, I thought running the Chicago Marathon would be a good idea.  Numerous times on training runs, the conversation would bring about the fact that I had been a swimmer, and the question that would usually follow was “Why aren’t you doing triathlons? As a swimmer you’d have a really good foundation for it…” My response?  “Well, yeah… but there’s this whole biking element that I’m not too sure about…”

Yes. The bike was the leg that kept me from even considering doing a triathlon.  I didn’t own a bike and it just seemed like a big (expensive) commitment.

I ended up not running the Chicago marathon on account of a fractured tibia, but the thought of maybe doing a triathlon stuck with me.  Over a dinner conversation one night, I met a new girlfriend who had just done her first triathlon.   She also had a swimming background and had bought a bike in order to do a triathlon and had had a ton of fun… and convinced me to give it a shot.  Not long after, off to the LBS we went.  With her as my “guide,” I checked out an entry level road bike (and had to ask how to shift gears before I took it for a test ride!).  It was ok, but $600 seemed like a lot of money for a bike. (Oh what little did I know…)

I ended up getting an entry level Giant from Johnny Sprockets.  While taking it for my first spin down the LFP, I remember my thoughts alternating between “Whee!!” and “OMG, this is great!” and “This is so much better than running – look at how much more stuff you can see!” How had I not done this before??

After completing a triathlon or two and starting to try to figure out options for riding routes other than the lakefront path, Wendy (yes, our Wendy!) and I met at random (that’s a fun story on its own) and started riding together.  She was new to Chicago and I was new to riding so we started exploring together.  She’s already recapped the day we learned about SMC so I won’t rehash…  but a few weeks after that fateful day, she explained the basics of “riding a wheel” to me, and we showed up for what was my first group ride.  Echos of the thoughts from my first ride danced in my head again in concert with Rox’s encouragements being shouted from behind me – “don’t let that gap open up! Hang in there – you can do it!”).   SO. MUCH. FUN.  I was hooked then and there and it turned out that this was just the start of a progression of firsts and various milestones… (and yes, it turned out that the sales guy was right!)

I rode regularly that first summer and the next…  Pedals, shoes and wheels all got slowly upgraded…  I put many more miles on that first bike that it was intended for and the shifters gave out…  Ken was able to track down replacements for me to keep it rideable but I started shopping for a new bike…  When I finally settled on one, it was a major upgrade.  On a whim I jumped into the beginner crits hosted by Half Acre that spring… a one-day racing license was quickly upgraded…  I won a prime, and just a few weeks later found myself unexpectedly on a podium… this racing thing was FUN!!!

I officially announced my retirement from triathlon following the Tour of Galena last year (without a doubt, the crit that weekend was THE. MOST. FUN. I HAVE HAD IN MY ENTIRE LIFE – you can read all about it here) because why bother with triathlons when I don’t really enjoy swimming or running and can just ride my bike??  Duh.

I’ve since added a third bike (cross) to my stable and hope to be spending some quality time on it this fall.  I’m sure it won’t be the last (N+1 right? J).  Looking back, I don’t think I could have even imagined how much I would learn and experience in just a few short years – or that I would go from someone who had to ask how to shift a bike to someone is approached by co-workers for advice on buying a bike.  I also can’t believe that I had no idea that such an awesome community of people existed and am so glad that the Spidermonkeys adopted me as a part of the group.  The support and camaraderie are like nothing I’ve ever experienced – like many, I feel like I “found my people” and I look forward to many, many more miles of smiles!! 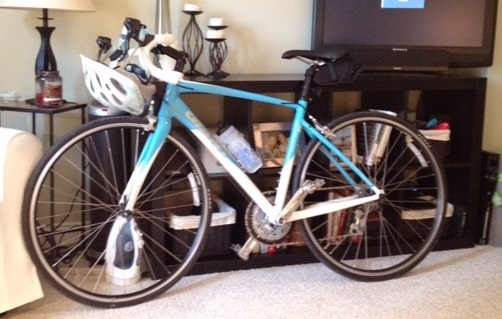 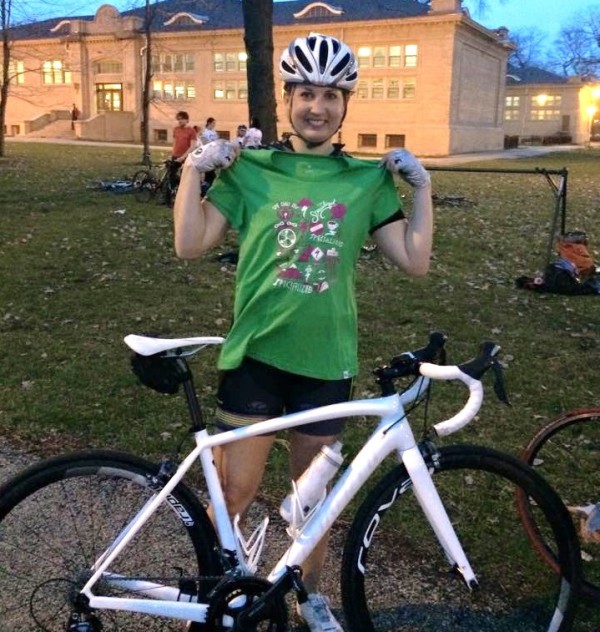 First week of racing and first prime! (and my new road bike)