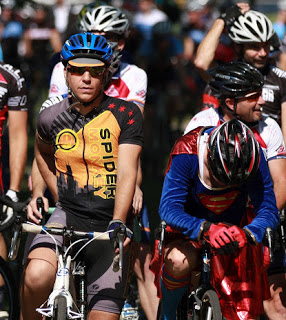 Hey gang!  I have gotten to know so many of you over the course of the last year and it’s been tremendous.

Here’s my journey:
I joined the team right around the Elk Grove Criterium last year.  My friend and one of triathlon training partners, Paul Halupka, talked me into trying my 1st road race event.  I had already gone on several training rides with the Spidermonkeys and was just starting to get exposed to local road racing.  Hearing others talk about the upcoming races and realizing I can keep up with some of these guys started to build my confidence and I decided to give it a try.  Perhaps jumping the gun, but being very inspired from the group rides, I declared Spidermonkey Cycling as my team at my first race. Later that week an email was forwarded to me sent out by Dean asking who the hell is Peter Cavoto??  I quickly responded to Dean letting him know it was me, PJ.  He obviously informed me that I can’t randomly put that down unless I am an official member of the club and I may get myself and the team in trouble.  I am pretty sure the next group ride I put a check in Dean’s hand.

Besides following my passion of art, I have always relished in individual competitive sports.  I grew up a swimmer and dabbling in running for conditioning in between winter and summer seasons.  However, I always seemed to come back to the bike with great interest and enthusiasm.  This may have started as a small boy when I was notorious for taking things apart and putting them back together, convincing only myself that I improved it somehow.  Trust me; there were many times that my dad had to complete the reassembly (including my sister’s bikes) several times.  My graduating gift after high school was a brand new Giant (3×8) road racing machine.  My parents were certain that I would parley into the world of triathlons with my background in all three disciplines.  I choose the road of being an official party-er and within a year sold the machine for cash.  A few years later, mountain biking was starting to become all the rage and my love for engaging with nature got me into trail riding.  It was rough going with having to cut our own trail systems out in forest preserves of the northwest suburbs, where we would often get chased out by rangers.  And in those days, suspension forks were just starting to make an appearance (yeah, I’m that old).  The rigid mountain bikes I rode took a beating every time out and I found myself having to make repairs daily.  I finally started investing into new machines and my love for mtb’ing took off.

In ‘98, I moved to the city to complete my BA at DePaul and discovered that the easiest transit in the city was by bike.  My love for mtb’ing dwindled due to the difficulty of traveling to get to a trail system and I felt a little out of place riding around on the grass on the lakefront (no cyclocross scene yet).  I started taking old mtb frames and re-purposing them into commuters.  Up to that point, I considered road riding boring in comparison to mtb’ing.  As I grew to love the challenge of riding everywhere in the city, 365 days a year, my passion grew.  Not to mention the challenge and rush of fighting for a piece of the road with automobiles.  Over the last 14 years, I’ve had more car-bike contact in this city than I care to share.

In the early 2000’s, I was introduced to triathlons with the Chicago Tri being my 1st.  I was hooked.  I competed in more than a dozen tri’s through 5 years.  I did well at them … and was most proud of my overall win at Lake Delavan in 2007.  Injuries caught up to me and I had to take a year off.  I came back to the sport, but my enthusiasm was only sparked by a small contingent of training buddies.  If you have every competed in tri’s prior to belonging to a team, you know that it can be a little on the lonely side.  You don’t really engage much with other racers and tend to race and train on your own since your competition is the clock.  So as you all have figured out, having the support and companionship of the Spidermonkeys makes a world of difference regarding the fun factor.

I have also been fairly involved in Chicago’s social cycling community for over 5 years.  This began with a ride group called Midnight Marauders.  I have co-chaired on the council for the last 3 years now.  If you have never heard of us, we consider that a good thing.  We try remaining somewhat of an anonymous underground group ride that explores the city, getting started after midnight and riding till dawn.  The group helped www.thechainlink.org get off the ground since we had over 100 members at that time.  We now have grown to 367 members and are still the largest monthly ride group listed on The Chainlink.  Our monthly ride participation can range anywhere from 10 to 200 riders any given month.  We do push the boundaries of Chicago law (being in the parks after close), but we ride respectfully and just want to enjoy the city under the stars.  Our club motto is we are a “drinking club with a biking problem”.  A similar group I roll with often, FBC – Full Moon Fiasco – also posted on the Chainlink.  Both are a lot of fun and usually involve a little liver abuse, but you can engage at your own tolerance (we do have many participants that don’t drink).  Come join, if you’re so inclined.

In close, I love bikes.  I build them, ride them hard, and often break them.  I consider them my band of horses and treat them as such.  So it has been tremendous to ‘gallop’ with such an enthusiastic, supportive group of riders.  I can’t say enough good stuff about how amazing this last year has been and how awesome it is to be part of the Spidermonkeys!  Thank you all for such a warm welcome into the group.  Let’s go ride!