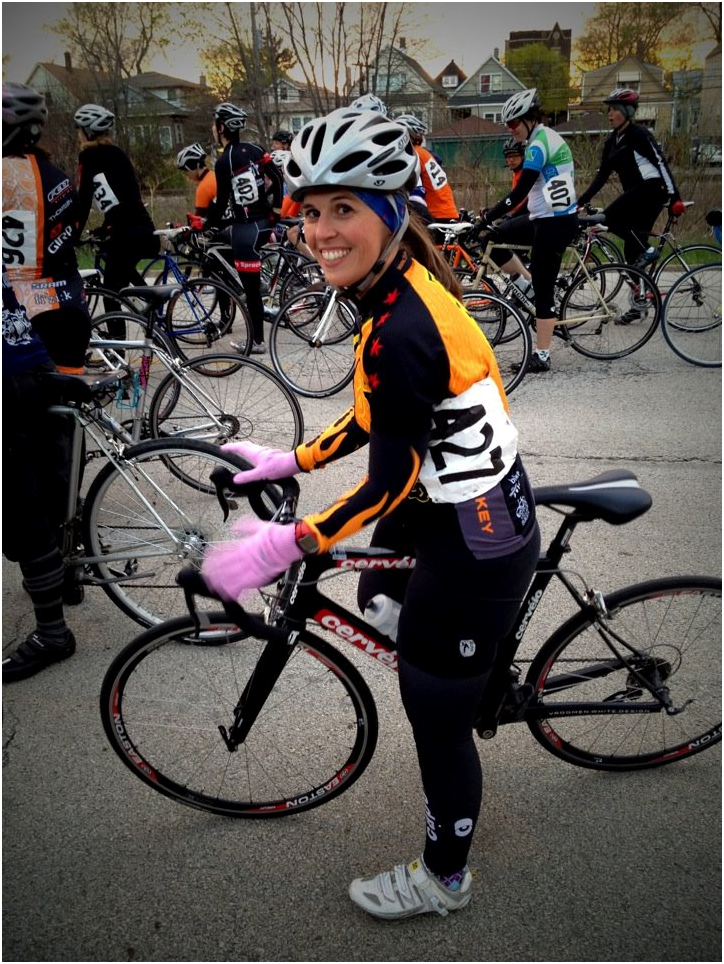 November 28, 2012 / admin / Comments Off on Spidermonkey of the Week – Michelle Moore 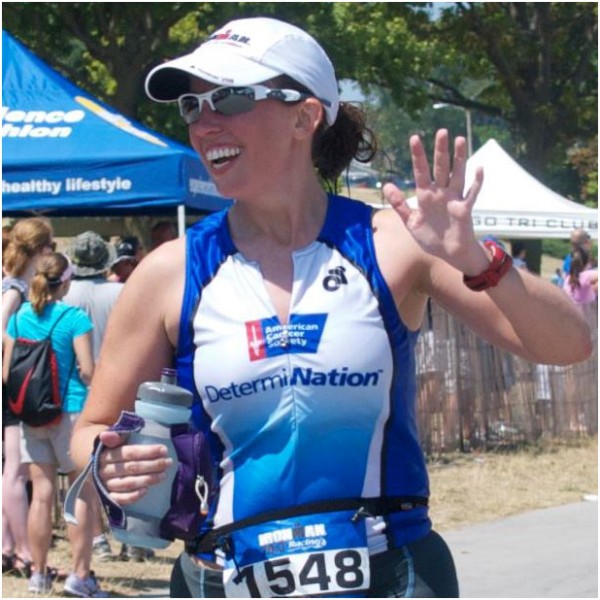 I grew up playing soccer from the age of 5 through high school. Naturally, that makes me a runner…right? If I needed more proof, it would be that my college days allowed me to play soccer for fun; then I moved to Chicago in 2000…found a soccer team and got involved again. Around the same time, I decided to take up running 5k and 10ks. In 2001, I made the leap from 10ks to my first marathon…see I AM a runner! Training for the Chicago Marathon was a much more daunting experience than I had anticipated. And, after my experience in 2001 (then twice in 2007 and 2009), I decided that marathons are for crazy people (sorry Vanessa).

I watched a friend compete in the Chicago Triathlon in 2002, and told myself “now this is something I can get behind.” So, in 2003 I decided it was time to try a new sport. I never really “learned” how to swim. I mean, if you call your mom dropping you in the pool and saying “swim to me” while you can clearly see her backing up because your eyes are wide open under water – then I guess I “learned.” But, I’m not a swimmer. Biking was also not my strong suit. See, I even called it “biking” at one point. My first bike (a Trek 7100 hybrid) was what I used for the triathlon for three straight years – yep, even put aero bars on that bad boy because I thought it would “help” me go faster. Not sure if it was the machine or the engine at fault there…likely both. I told myself that all I had to do was get through the first two legs of the race, and then I’d be running. Something I was comfortable with! Hmm, not so much. Wow, running after swimming and biking sure was a LOT harder than I thought. What keeps me going 99% of the time is the DetermiNation program through the American Cancer Society. While I work on the program as my real job, I’ve been running and fundraising to fight cancer since 2005. It makes all the training and racing that much more worth it.

It wasn’t until 2010 that I attempted my first group ride. Having Mark in my life, who is very much immersed into the cycling world, I figured it was inevitable that someday I’d give it a whirl. And, all my triathlete friends kept telling me how much group riding would help me. So I went on my first group ride in September 2010, and to say I was scared was an understatement. I stayed at the back as I was told to do, and I was totally alone back there. A little while after the ride started a guy rode up next to me, who was kind enough to talk to me most of the way up to Highland Park – which was nice because it took my mind off the fear I had of being within inches of someone’s rear wheel. I later learned that this guy’s name was “Castro.” At some point along the way the pace increased and somehow I found myself in the middle of the pack, next to the curb. I hated it and loved it at the same time. I was terrified of being next to the curb because I all I could think about was hitting a pothole and crashing. Nevertheless, I made it to the coffee shop, and back home…and thought my legs were going to fall off. But, I was hooked! Enough to try a few more before the season ended. 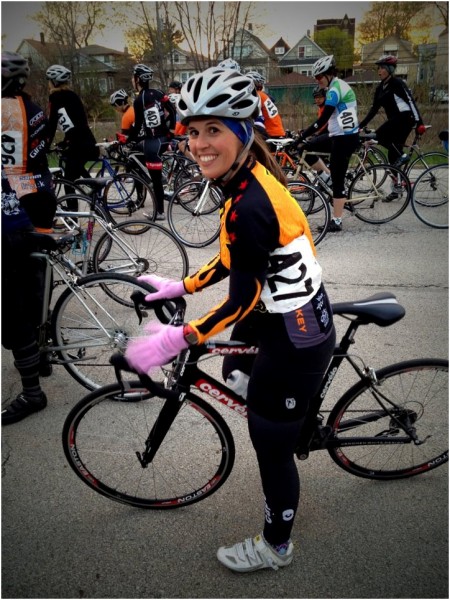 The next summer Vanessa and Dean came to a party I hosted, and Vanessa and I spent a lot of time talking about the girl’s rides. I finally joined the ladies in the middle of August. I got dropped like third period French the first few times, but the one time I stayed with the group to Tower Road, I knew I was hooked. Unfortunately, I joined the rides too late in the year, because I only made it to four or five before they were over. I also spent more time understanding the larger group rides, and trying to stay with the group the entire way to Highland Park. I very quickly learned that if I start at the back of the group, I’ll end up alone on that sprint up to Tower Road.

It wasn’t until the chili cook off in November 2011 when Vanessa and Dean asked me if I wanted to join the team. I had joined so many group rides that I already felt like part of it, so I figured why not make it official.
2012 was a year of firsts for me. I decided to try racing crits. My first was Gapers Block, and I was terrified. A few ladies from the team (Kristi Hanson, Kelly Clarke, Katie Iserman, Sarah Rice – and I know I’m forgetting a few – sorry!) as well as Mark Z and Drew took us all on a ride down to the site of where Gapers is held. We spent some time riding the course, practicing corners, sprints, etc. The knowledge and experience on this team is remarkable. I knew I had a lot to learn, but being with this group that day made me realize how lucky I was to have found a team that is willing to take an entire Sunday to “train” me for my very first race. I’ve watched crits thinking those people are crazy, but then when I actually raced at the end of March, I was blown away. Literally. Blown off the back of the pack and finished alone on day one. But, as I was taught, I got back on my bike for day two. Much better. Bike racing is quite fun, and easier, when you can stay with the pack. I finished somewhere in the middle, and came back for my third and final day. Again, I finished mid pack. Not too shabby for a first timer. 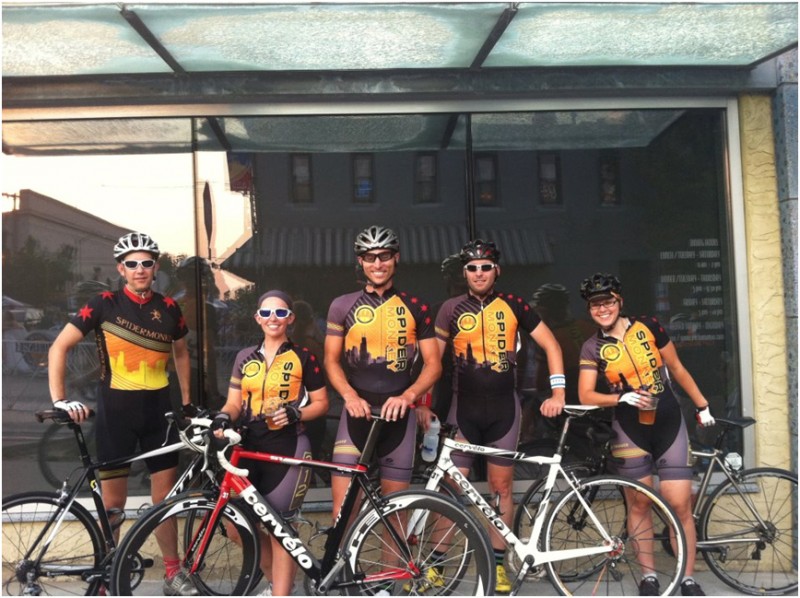 It was enough to make me sign up for the Lincoln Park Crit the next month, where things didn’t go well. I crashed, took out another girl, but was able to get back on my bike and finish. I was pissed, hurt and scared to ride close to anyone again. So I stayed off my bike for the next month. But then I had heard about the Tour of Lawrence, and having gone to school there, I wanted to join that trip. So, I trained, and caravanned to my alma mater where we all had an excellent time, albeit the insanely hot temps…and Hayes getting wasted alone in the hotel “pool.”

This year has been completely amazing for me as a cyclist. I still run and take part in triathlons; I even coach running and triathlon programs through Chicago Endurance Sports. Triathlon will always be a part of me, and in turn, so will running. I have had the opportunity to meet two of the greatest icons in the triathlon world at some of the races I’ve competed in (Chrissy Wellington and Craig Alexander). 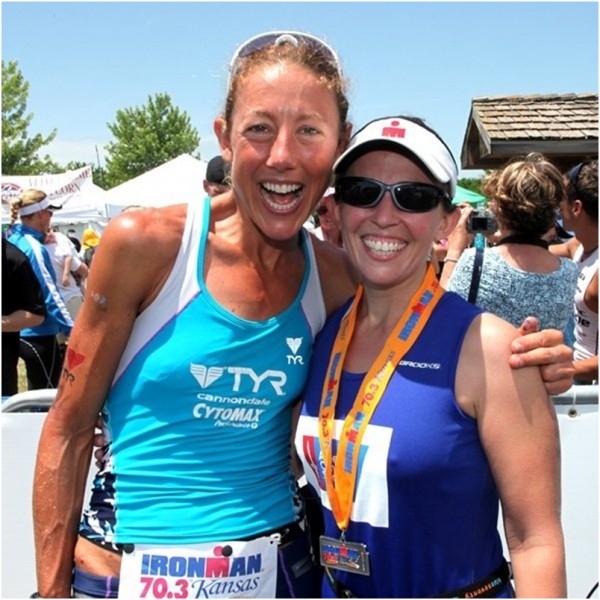 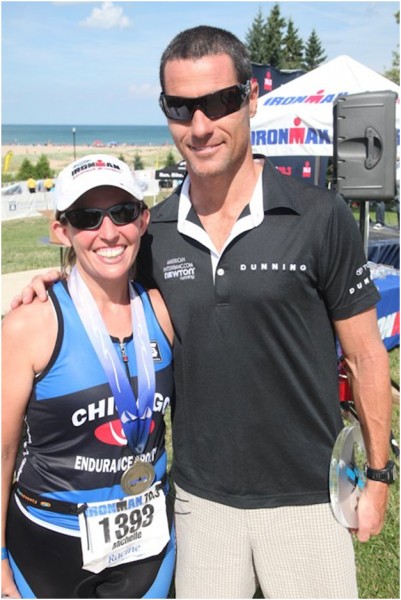 Being a Spidermonkey has given me the confidence and motivation to get on my bike 3-4 days a week and push myself harder. I found myself on so many group rides (and many more girls rides, heck even a few Wednesday night rides) this year that some of my training partners were upset I wasn’t attending Tuesday morning spin class. Being on the road with the girls for two hours is WAY better than a 60 min spin class. I was able to knock out my fastest 5k time ever, and I owe that to my group training with this team. I even had the best triathlon to-date (well the bike portion anyway) – again, due to being a Spidermonkey. 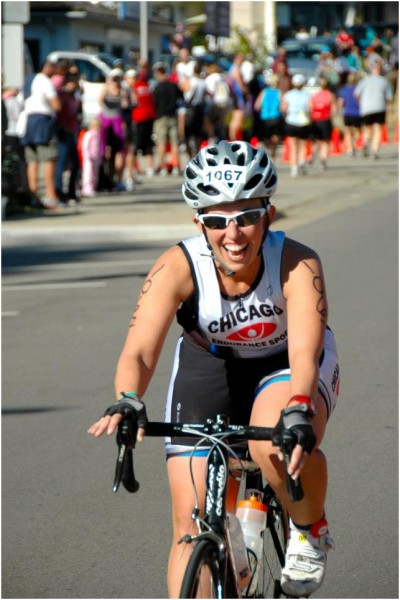 Every time I put on my Spidermonkey kit, I feel a sense of pride. I see the way other groups acknowledge us when were out on the road, and how well respected every member of the team is. I even wore my kit to spin class one day and all my tri friends were like “oh is that your cycling team?” I smiled and said, “yes, yes it is.”

Ps. To this day, I still fear those little curbs a bit so it’s best if you just let me ride on the outside of the pack. :-)