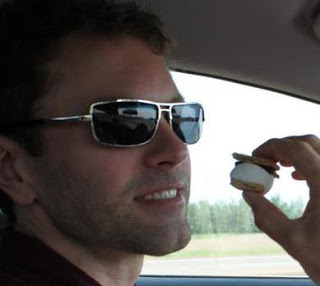 Spidermonkey of the Week – Kyle Kershasky

I first heard about the Spidermonkeys at the MS Ride 2010. It was the year the ride was cut short and everyone ended up inside at the beer tent. Dean was talking to a fellow Y Spin instructor telling me about how he trained to ride thru Alaska, Antarctica or something with an A. Although I’ve never seen Dean at the Y nor did I realize until much later that he helped create SMC, I hope he comes to my Saturday spin class someday and make this whole story come full circle. There’s a first for everything.

I first got into biking when I was about 5-ish. The guys on my block all had dirt bikes and it was our way of getting to the park, impressing that one girl, even if she was a tomboy and finding freedom. My first bike was a Huffy with a banana seat that read “Desperado”. (The older I got the less cool it became) I eventually spray painted silver and tricked it out with bike accessories from Zayres. It even had “chromie” valve covers that we stole from neighborhood cars.

My first and most recent cycling injury was around the age of 7. My dad taught a basketball camp. I failed miserably at basketball. I weighed nothing and got pummeled by other kids. My dad was also the coach of my grade school team (even with Dad as coach I didn’t start). So I was biking down this monster hill and God knows why I jammed my foot hard between the fork and the tire – this is what scares me about cyclocross – and I flew over my handlebars and planted my right cheek onto the asphalt. I had a big scab on my face for the rest of the summer. I was an only child.

My first “10 speed” bike was in 6th grade. My parents bought it for me as a birthday present. They had it waiting for me in the kitchen with a bow on it. It was yellow with a chocolate brown seat.. Totally not cool compared to Danny’s Hutch and totally incapable of doing broncos. But my parents though I should have one. The presentation of the bike was anticlimactic. On the way home I leaked out that I beat my parents to the mail and hid my report card from them. Boy that was a good birthday.

My first time getting wasted was the first time I got drunk. It was the summer after senior year H.S. My friend worked at the yacht club in Milwaukee and we waited until all the members left. It was sweet drink followed by hard liquor until I puked and puked over the dock into Lake Michigan. The whole night. Puking, hurling and trying to convince this girl that I was legal. (18). I didn’t drink again until the end of summer when I went to college. Which is where I found beer.

I drank a lot of beer in college. Busch Light Draft. We had a built in bookcase lined with empty beer bottles 4 deep. We threw huge parties. It was weekend after weekend of drinking. What I lacked in athletic skills I made up for in drinking. Floor hockey? Alcohol. Entertainment? Alcohol. Flute recital ? Alcohol in a bong. I permanently cured my shy factor with alcohol. I don’t know how to say this in this blog but I no longer drink. Much. Anymore. But when I do, it’s 312. And boy do I get buzzed. Off one beer. Sometimes half.

My first triathlon was in 2001 on a mountain bike. I saw it as a way to have fun. Dress up in costume, throw candy to the crowd like a parade. Fun stuff. Then once I started training for it I realized these people are serious. There are no costumes, no candy and no drinking. I did the triathlon and from there I was hooked. I upgraded to a road bike, did century rides and became a Spin instructor. Over the next ten years I went on to do the Shamrock Shuffle, Alcatraz, Ironman, ride into my wedding on a tandem, a marathon (in that order) and most recently a USA Triathlon coach and NASM personal trainer. All from the simple interaction of:

Co-worker: You want to do the Chicago Triathlon?
Me: No. Are you nuts? Shit.

Cylclocross is big in SMC. My first time seeing a cyclocross was last month at Montrose. It was freaking awesome. I made a video of it. About the only thing I love more than cycling is making videos of cycling. I even made a video for this entry. I loved the Montrose video. People drinking, cheering, getting dirty, dressed in costumes, handing out candy. Oh yeah, I see where this is going. Where do I get a cross bike….?

My first Spidermonkey ride was on the fast Sunday ride this summer. I really wanted to join a bike group. There’s a an awe from seeing a pack of riders go by. I heard of this Spidermonkey that we speak of on more than one occasion. After the MS ride this year Kristi helped bridge the gap and gave me the low down on the rides. I made it to every Sunday ride that I could in the summer and I and have also enjoyed the VQ Spidermonkey edition. It’s the perfect group. Sprint points, a mix of athletes, philanthropy and a little bit rock ‘n roll. Oh, and alcohol. In my best Dos Equis voice “I don’t always drink. But when I do. It’s with the Spidermonkeys.”

SMC will always be my first bike club love. You had me at “pisses excellence.”