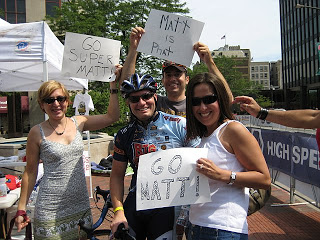 December 13, 2011 / admin / 0 Comments
In a nod to that movie about drinking milkshakes, I’m going to name this guest SOTW article There Will Be Poop.  It’s a joke and a warning.
I’m not really sure how someone who doesn’t even ride bikes is bestowed the honor of SOTW, but if you don’t make a stink neither will I (poop pun #1).  I started riding bikes in high school because I didn’t make the cut for the soccer team.  I was crushed, but were it not for that indignity (one of many), I never would have met Dean some 15 years later and eventually become a Spidermonkey.  More on the Mean Wiener later.
In college, Chris (a riding buddy) and I went to Arizona in January for a little early season training.  We rode around on our own, doing stupid stuff like riding past Tortilla Flats (dirt roads) and passing cars on the descent of South Mountain.  Not satisfied with trying to kill ourselves, we called around bike shops looking for some cool group rides.  We passed some test that we didn’t even know we were taking on the second call, and the bike shop guy whispered in hushed tones, “Be at Globe at 7 on Saturday at the corner of such and such if you want to ride with Tony.”  We didn’t think it could be real…riding with Tony Rominger–winner of 4 grand tours and 3 tour stages.  But when we pulled up, he was there, and he was glorious.  He looked a little nervous when he saw us, but who can blame him?  We were a couple of amateurs who thought they could hang with the hour record holder.  Actually, as we would later find out, he was on vacation and not even training, and the team doctor had forbade him from going over 110 bpm or something.  However, Tony can ride at 109 bpm no-handed holding La Gazetta with his right hand and sipping a cappuccino with his left pinky faster than Chris and I can ride our bikes.  After getting shot out of a cannon.  Straight down off a cliff.  With a downwind.
So, after 75 miles or so of this 90-mile mountain death march, Tony sees a gas station and wants to stop.  We had been out of water and food for the last 50 miles, so yeah, we stopped too.  Now we are getting to the point of this story: I had to poop, and in the worst way.  Like, a had-to-poop-30-miles-ago-but-I’m-too-afraid-to-ask-this-man-who-doesn’t-sweat-or-breathe-while-riding-his-bike-at-9,000-mph-to-stop-so-I’ll-just-hold-itkind of poop.  So, imagine my relief when we stop!  We’ll refill our bottles.  We’ll peruse the fig newton aisle.  Maybe we’ll chat over muffins and coffee?
No.  Tony strolls in, selects a Mountain Dew, and slams it.  Gets back on his bike.  Looks around.  Ready to leave.
I panic.  I can’t ask him to wait while I poop!  Now I have a choice to make.  Do I bum rush the bathroom and hope everything goes well (and super quick) and Tony doesn’t leave?  Or do I play it cool and try to limp in the last 20-25 miles, Tony never being the wiser?  I chose door #2.  Riding with Tony was like winning the lottery…I didn’t want to flush it all down the drain and get left behind!  I put on my best poker face and got on my bike, smiling on the outside, ready to explode on the inside.
I didn’t make it very far.  I rode up to Chris and told him that I needed him to come back for me with the car.  Chris nodded.  He’d been briefed on the potential situation.  And just like that, I slid out of the back of the pack and crawled into the ditch on the side of the road at the base of a mountain in Arizona.  I will spare you the grisly details, but suffice to say that I discovered an alternate use for and now have a healthy respect for roadside litter.  For those of you just joining in, yes, I pooped in a ditch and wiped my ass with trash.

On the bright side – when Chris got to the end of the ride Tony looked around and said, “Where’s Matt?”  Chris told him that I had stopped a ways back.  Tony turned around and pointed his bike back down the mountain.  Chris stopped him: “No Tony…I think we are going to need the car for this.”  Tony nodded with a knowing smile and then disappeared in a puff of white smoke.

Fast forward to 2005.  I hadn’t ridden for several years and had ballooned up to about 230. I decided to start riding again and found a group that rode from Higher Gear on Fullerton (R.I.P.).  This is where I first met Dean.  He would constantly tell me how fat I was.  He would say, “You’re fat!”  Dean was and is a real Mean Weenie.  My only goal in life was to drop Dean.  But, he motivated me to lose weight!  For that I thank him.
Dean always credits me with being a founder of Spidermonkeys.  Dean is very generous – we all talked about it but he put in all the work.  So…I’m glad I never made the soccer team.  I’m glad Dean told me I was fat.  Without all that I never would have had great Spidermonkey experiences, like the 2011 North Shore Century: 9,000 Flats Edition.
Silver linings everywhere.