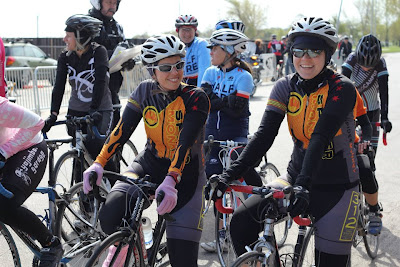 It’s easy to get excited about races that happen within the boundaries of the great city of Chicago, especially those that happen in our backyard. So when xXx announced the Alderman James Cappleman’s 46th Ward Lincoln Park Criterium to replace last years south side Sherman Park race, the Spidermonkies were all in. Though, in all honesty, I was far more excited for the Leland race happening the day before. I had never tried my hand at a road race, and I fell in love with the grueling depictions of last year’s race. I was set to ride Leland no matter what Mother Nature decided to bestow on us that day. The Lincoln Park crit was not my priority, but you can’t say no to a race that’s happening in your own back yard.

I arrived at Montrose Beach unprepared and late. One of the things that holds me back from being a serious and successful cyclist is simply that my social life is very important to me, and sometimes I’m not willing to make the sacrifice for a good night’s sleep. After Leland on Saturday, I had celebratory post-race lunch and beers with Sarah Rice, Kristi Hanson, Annette Stahelin, and Annie Byrne. Sarah bought us our beers with the money she earned getting second place in the 1/2/3 race at Leland – what a great teammate! Reasonable people would stop there, knowing they were racing again the next day. But when we got back to the city I rushed out to Roller Derby where I met some co-workers. From there, we watched an exciting Blackhawks playoff game that went into overtime and left us nearly closing down the bar. With little sleep, minimal warm-up, and legs that still felt the gravel roads from the day prior, I lined up for the race. I leaned over my handlebars and closed my eyes for a minute or two. I could have taken a nap right there. But then I started joking around with Dean Okun and Michelle Moore and felt better. If I forget to mention this later, there were a ton of Spidermonkies that came out to cheer us on and it was awesome!

I had pre-ridden the course on Thursday with my old pal Annette and it had been incredibly windy. The weather report called for 9mph on this Sunday, but as the weatherman often lies, the wind felt more about 15-18mph. The cold gusts would definitely be a factor in the stretch to the finish line. The course was more interesting than the only other place I’ve done a crit – Calumet Park for the Half Acre Gaper’s Block crits. I figured the 180 degree turn would break up the pack more, but Sue Wellinghoff said she thought it worked as an equalizer, because it slowed everyone down (full article). Regardless, it would take more skill and calculation than the easy corners I had seen at Calumet Park. I was intimidated by the prospects.

To start the course, there was a slight incline after the first turn, a slight descent into the second turn, and incline and then descent into the 180 degree turn, and you come out of the 180 going uphill. A descent takes you into the fourth turn which is a gradual and easy turn made difficult when gusts of wind start hitting you. The home stretch lies just west of the lake with nothing to block the wind. When I talk about ascents, this is obviously nothing like the aggressive hills we saw in Galena a couple weekends prior, but they were notable enough to influence placement of possible attacks.

Having no real expectations, at the start of the race I pedaled at a comfortable pace. Somehow this landed me at the front of the pack. Then just before the second turn, Marie Snyder came around and a handful of the faster girls followed. I dropped back, approaching the 180 turn. I expected it to be chaotic and scary. It wasn’t at all. Everyone slowed down so much and took wide enough lines that it seemed very safe.

Out of the 180, everyone sprints back to the pack, so it makes sense that the first people into that turn will have an easier time recovering. You would want to get back into a good position before getting to the fourth turn of the course, because the wind is so rough on that final strait away that having a solid place in the pack could make a huge difference. I never found that sweet spot in the pack. I stuck near the pack, but never fully integrated.

Looking ahead, I could see Kristi, Stephanie, and Michelle with great positioning. I was hanging on, but I started to drop back. Then on one lap, around the fourth turn, I saw Michelle go down. She got tangled with another girl and they both went flying. I swerved around them. I was worried she was OK. I tried to shout to teammates, telling them to make sure she was not hurt. I was kind of rattled. In my trying to locate teammates on the sidelines, I had fallen off the back of the pack. For the rest of the race they would gain a little more distance each lap.

The last two laps, I could see the leaders coming back towards the fourth turn as I was in the second turn, approaching the 180. It was kind of like cyclocross, when the course doubles back on itself and allows you to see just how far back you are. Also in the last two laps, girls started dropping off the pack. I made it my goal to just start picking people off as they fell back. Going into the final turn I saw Michelle ahead of me. Good. She was fine and was able to take a free lap. Crossing the finish line, I saw Dean, and he shouted to me, “Stephanie got second!” Awesome! After finishing, I caught up to Michelle and asked her what happened. She had crashed, but aside from a scrape on her hand she was totally fine. I was impressed she had been so calm and able to find the officials to take her free lap. She did everything right.

Later on I heard that Kristi’s lead out helped Stephanie get into position for her second place finish. It was a pretty selfless act for her to come out of the 180 sprinting hard to lead towards the finish. And Stephanie is so strong this year. I’m really excited that I get to call these women that race with great intuition and power my teammates.

I have a lot of work to do before I am racing at the level I want to be, but it’s been great to look up to Kristi Hanson, Stephanie Levin, Sarah Rice, and Kristen Meshberg. They have a lot of experience and it’s fun watching them race. It’s also been great to see Michelle Moore come out in her first season and basically kill it with great positioning and strong riding. Ladies, you teach me a lot every time I ride with you, and I’m grateful for it.

Thanks to everyone who came out to race and/or cheer!
And congratulations to Kristen and Sarah on their third One-Two finish!