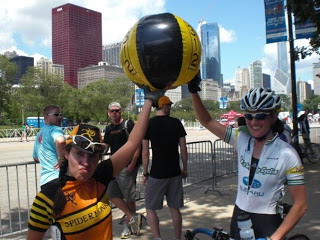 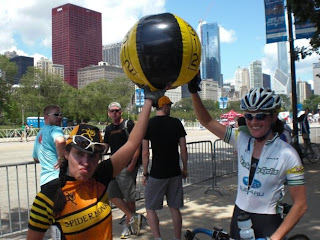 So it was great to be racing this Sunday with a huge cheering section and a friend out on the course with me. Katie and I planned on sticking together this race but I kept finding myself in the very back of the pack. The first few laps I don’t remember much. I kept trying to find Katie and stay near her so I had someone I knew around. However, I am really still getting a feel for racing and this was the biggest field I had been in. So mostly i was just trying to stay upright and get comfortable. But the speed wasn’t anything that I couldn’t handle. Any time I started to feel tired I would just get so excited by everyone cheering me on that I wouldn’t slow down. John Lyon was even there on the back side of the course to cheer me on that side! Having all that support is so great.

After the first 10 minutes or so I was comfortable and moved toward the front of the pack as much as possible. I was feeling really good. My thoughts went from “don’t get dropped and don’t crash” to “Hey, Let’s see how good I can do!”. But then right on turn four on the second to last lap there was a crash right in front of me that I narrowly avoided. I have no idea how it happened but I remember thinking “well I think I’m going down but I hope I don’t.” I swerved over to the left of the downed riders just in time and sped to get back with the main field.

At that point I couldn’t find Katie and was worried that she had been involved in the crash but was pretty sure she hadn’t. It was the last lap and I felt pretty good, so i started moving to the front because I remember someone saying that you if you could make it into the front for the last “hill” you had a good chance of making the top 5. I felt great and was right up near the front until turn 3 when a woman came a little to close to me in turn three and I braked just enough to lose momentum going up the last “hill”. I lost contact with the group at that point and was totally bummed. HOWEVER, it was a really fun race and great to have someone I knew in the group. But the most awesomest part was hearing my name and GO LIL V more than anything else!