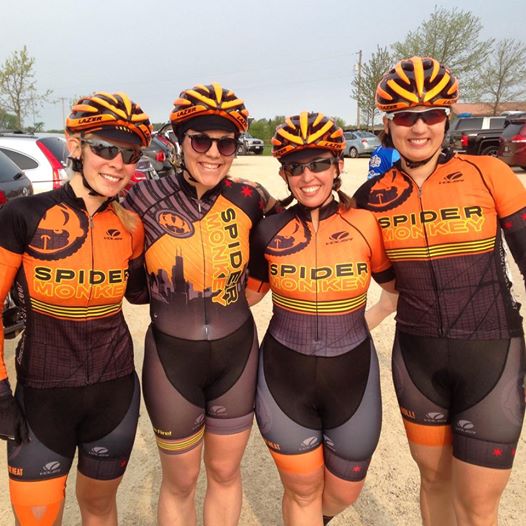 At the beginning of every race, officials break down rules for the day. I hate to admit that this has become slightly like the airline safety procedure where I tend to zone out. While previously this has not been an issue, the day of the Lacrosse road race proved different.

The neutral roll out was filled with chatter from cat 4 women who were attempting to stay warm on a cold morning. We started up the main road, and the official blew the whistle. Everyone began to fight for the perfect spot out of the strong head wind. We got settled and I found my comfy 3rd wheel spot. Not one minute later, the wheel I so comfily sat behind, had a mechanical.

As a beginner racer, I am still figuring out the “expect the unexpected” mentality, as I am focused on not getting dropped. As I watched the wheel in front of me come to a halt and the pedals on the bike stop turning, I had to think quickly. Do I attempt to go right, and risk getting to close to the woman next to me? Do I hit the brakes and hope the woman behind me does the same? Or do I go left and cross the yellow line?

I chose to go to the left, cross the yellow line, and go around the stalled bike in front of me. Not 5 seconds later, I heard a whistle.

The official rode up next to me on his moto and pulled me out of the pack. I was told I crossed the yellow line and that was means for disqualification. I began to argue, and tried to explain the situation. The official was less than pleased with me, using the “if that line were a ditch would you still have gone to the left?” argument.

I watched the pack get farther and farther from me, and felt the headwind get stronger and stronger as I became completely exposed. After arguing, I was told I could attempt to chase the pack (now having about a minute gap).

Not even one mile into the 27.3 mile race, I had been dropped off the back, and it didn’t take long to realize I would be riding the race solo. My blood was boiling, I was determined to catch the pack, but I just couldn’t close such a large gap by myself. My legs bonked after lap one, my torn meniscus in my knee began to swell, and admittedly I thought about just hopping in the next car I saw drive by and giving in. But I came around the last corner to hear my wonderful teammates cheering me on, and through the pain and tears (yes, there were tears), I rode through the finish.

It was not one of my finest races, both in how I finished and the way I handled myself. I was in my own head, I was angry and hurting, and I let it get the best of me. However, I did it, I finished, and it became a great learning experience for me: when your mind gives up, keep going, and ALWAYS follow the yellow line rule.