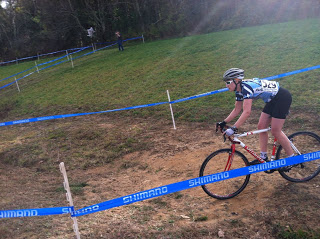 by Grace Chappell
Hey Monkeys!!  Ok, I know this isn’t a CCC report, but I wanted to share a little bit about the racing I’ve had the chance to enjoy out here in North Carolina…

Last weekend I made the trip to Boone, in Western NC (yes it is named for Daniel Boone) with my new UNC teammates to make my collegiate cycling debut!  The season starts a little later here so I am only a few weeks into the cyclocross season, still reminding my legs what the heck to do out there.   The collegiate dynamic was different than what I am accustomed to; very small, laid back, and everyone there is on one of 5 or 6 teams.  The course was out in the middle of nowhere, located at the Boone fairgrounds with a mountain backdrop.  The course was pretty straightforward; lots of grassy 180s, some tough off-camber, a very steep grass run up, and for some reason we rode up and through a little stage.  I lined up with only four other Women As, mixed in with about 30 Men B.  45 minutes.  Clean start, and we were off!  I found myself positioned close behind the first 2 girls after one lap, but unfortunately for me, at this early point in the race I felt like my legs might explode (something to do with that awful run-up?).  I knew I had a long time to go, and tried not to let too much space get between my wheel and theirs’.  That goal came to a crashing halt when I rode straight through some course tape and had to circle back around to get back on course.  Lesson: good to focus on hammering, not good to focus so much you don’t pay attention to where you are going.  The rest of the race was pretty much by myself, and I finished in third.  No payouts in collegiate racing, but I got points for UNC.  Also: no beer.

Day 2 was race #3 of the NCCX series, at the same location.  I was excited to get a second go at the course and see some folks I knew would coming in for the race.  There were all the makings of a good cross race: a big crowd, costumes both on and off the course, very chilly (appropriate for ‘cross season!) temperatures, beer, free food, dogs, kids, hipsters, and cowbells.  22 women in the 1/2/3 race, and the way it is set up here we go after the 45+ and before the 55+ men.  In my experience thus far, this means I race for about 50 minutes or more if they let the 45+ men finish a full 45 minutes.  So. Painful.  I felt much better for the first couple laps of this race than I had the day before, no leg muscle explosions, and I was in front of one of the girls who had beat me the day before.  Awesome!  Keep this up!  I could hear a UNC teammate yelling for me to “move up! move up!” and so I put my mind to try to do just that and managed to blow past a few women during laps 2 and 3 on the straight sections.  The run up was beginning to crush my spirit by the 3rd time up it, but fortunately there were lots of people yelling and heckling all along the hill which always brings a smile to my face.  They were telling me to run faster but all I wanted to do was lie down and take a nap.  I brought back my Rainbow Brite get-up, so that allowed for some personalized cheering (all the more reason to race in costume, people!).  Ok, 2 laps to go on the counter, but the women I had passed were beginning to catch back up.  Why aren’t they as tired as I am??  As I came through for the bell lap I got passed by two of them and it was all I could do at that point to keep them in sight for the final lap.  Through the stage, so many 180s, stupid run-up, and done.  I was tired!  Free tamales afterward and a nice mountain-y cooldown ride.

It’s not the same without the Spidermonkey cheering crew or a 312 after my race, of course, but I’m making the most of it :)  Can’t wait to race in Woodstock with some of you this Sunday!!

Here is a highlights video from cyclingdirt if you just happen to like watching cyclocross videos:  I’m in there for a split second…
http://www.cyclingdirt.org/video/660318-2012-NCCX-3-Boone-Highlights-Part-2

Spidermonkey of the Week – Jan Van Nuffelen aka The Belgian