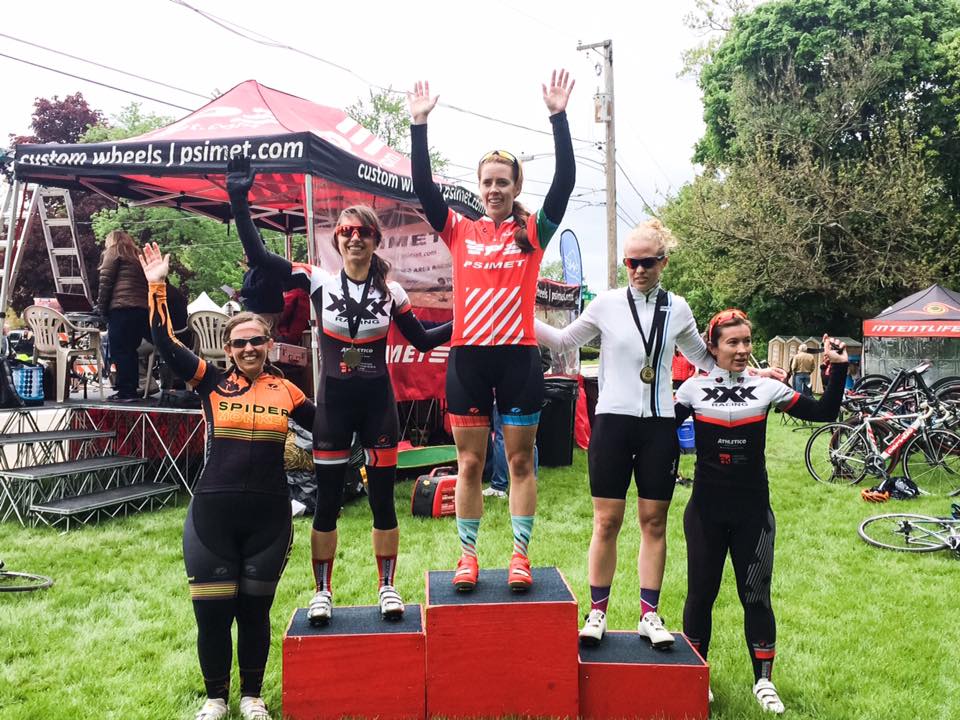 After a great 33 min warm up I rolled to the line for the masters race feeling solid and ready. After the whistle blew, I had a solid start. My goal was to get out toward the front to see how the group handled the first few laps, and be first or second going into the chicane on lap one. Success! On the third lap, there was an attack of 3 women, but I was on the inside of the group and I couldn’t get around to go with them. I stayed where I was to see what others would do, but since an xXx and Psimet rider were in the break, their teammates did a nice job of slowing down the pack. Grrrr! We were going fairly slow which is always frustrating to me, so after the 4th lap I tried to bridge up to them (I tend to get a bit impatient just sitting in and going slow). I started to, but quickly realized that I didn’t have it in my legs quite yet. So I floated back to the group, and the gap of the break continued to grow as the race progressed.

One thing that confused me is that the race announcer kept announcing the sprint point laps, even as our group rolled by…so for some reason I thought sprint points were available to our group in addition to the breakaway…b/c I “won” both times…but after the race I realized this probably wasn’t true. I talked to the officials and they said “as a courtesy they announce it in case we catch the break…” I thought that was pretty stupid b/c the gap was at least 25 seconds and it confused our group. Oh well, hopefully i didn’t burn too many matches doing that. In fact, it kept me at the front for the majority of the race. As the last two laps came down, I could tell xXx was setting up to lead out Katie George. She yelled to her teammate to go left b/c I was blocking her from getting on the wheel she needed :) As we came into the final turn/chicane, I was probably 4th wheel (not good, I wanted to be 2nd). I waited for a second after we came off the hill, and tried to grab Leah Sanda’s wheel, but couldn’t quite get there. Leah won the field sprint, Katie George got 2nd and I got 3rd (so 4th, 5th and 6th respectively).

Before the start of this race, Ashley and I discussed getting out in front of the pack the first loop to make sure we could set the tone and stay away from sketchy wheels that would be afraid of/break in the chicane. This was a smart move because there were some women that crashed in this race last year and still had jitters about it.

Whistle blew, Ash and I took off as planned and controlled the first few laps of the race. Then, it was time to let others do the work for a bit. As the first sprint point lap came, Ashley went for it just before the chicane, I went with her and watched her get first. I was a little too overconfident I had 2nd locked up and just before the line I looked over my shoulder and saw an Intent girl speeding toward me: she got 2nd, I got 3rd for the sprint points. Dammit! :(

As the laps rolled on, I sat in a little to conserve energy. The wind was picking up compared to my first race. A few times the junior in the field laid down a solid/strong attack, but she could never hold it. The good thing is that it kept the pace of the race fairly high. Ashley was always right there – she has good instincts and can be strong at the front, so I stuck as close to her as I could. I’m a little hazy on the 2nd set of sprint points, but I know I was 4th or 5th for those.

Overall though, I was a little disappointed in this race. I definitely had good positioning all race, toward the front, didn’t do too much work, but my legs felt heavier than I had thought they would. Did I go too hard in the Master’s? Not sure…it should have opened me up enough for this race. And, I did a proper cool down, ate, and stayed warm, hydrated between races. Not sure what the issue was, but I knew in lap 3 that I probably wasn’t going to win the race. I had a better feeling last week in La Crosse about my performance, and I just didn’t feel the same today. I’m not unhappy with my overall placing, but wish it would have gone more my way – or at least that it felt as good as it did during the Master’s race. 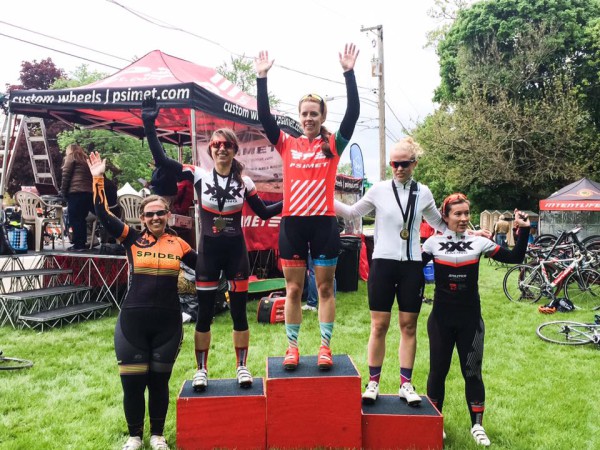 Wow, this was such a difficult race. I’m still trying to determine if this was more difficult or not than snake alley. I think the % incline was worse, but the actual climb time is shorter. Either way, damn!

First lap is the hardest b/c you essentially start at the bottom of the hill and climb immediately. I had taken two practice laps so I knew what to expect, but it’s nothing like in the race. My lungs were on FIRE that first lap. Yes I fell off a little, but since I am a good descender, I caught back on after the climb. They had told us at the start that the 2nd lap through would be QOM points, so it definitely picked up on the climb. This is where I got dropped. But, I got dropped with 4 other girls (3 BFF and 1 Intent rider). So, the 5 of us basically stuck together for the next 4 laps. Each time we entered the climb, I saw the lead pack. They had maybe 10-15 seconds on us. Not bad.

At the descent of the 3rd lap I took off, hoping I might be able to bridge the gap. This allowed me to be first up the hill for the 4th climb; I was feeling pretty good this lap (which was incredibly shocking to me). I held the lead for a bit, but not enough to catch the leaders. I was bummed, but decided since we only had 2 to go, that I’d let the others do the work up/down the hill so I could conserve something for the final lap.

I gave it everything I had the last two climbs, and as we came to the top of the final climb, the Intent girl was out front, then Lauren from BFF, then me. Intent was first into the turn for the descent; I knew I had time to catch up. So, I rolled up to Lauren’s (BFF) wheel and let her bring me up to the Intent rider. As we entered the 2nd to last turn I made sure I was 2nd wheel going into the final turn. It was Lauren/BFF and Lori/Intent and me. I got out of the saddle and sprinted hard. I 7th overall (winning that sprint). This gave me enough points to end up 5th overall for the Omnium.

I’ll be enjoying some much needed rest and taking a week to recover, then it’s over to Iowa Memorial Day weekend for Snake Alley and Melon City!