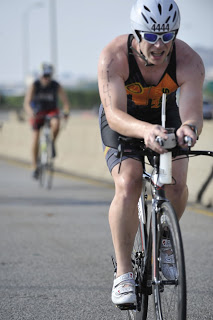 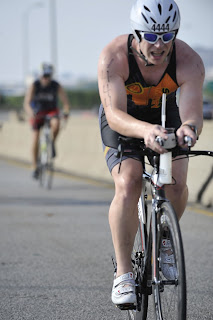 by Trent Williams
This race report is the culmination of more than 4 years of planning, dedication, trying, passion, getting it wrong, frustration, more trying, getting it wrong again, setback, and trying to finally get it right.  A month after I completed my second year of triathlon and racing with a finish time 25 minutes faster than my first triathlon ever, I set a high goal for myself, that goal, was finishing the Chicago Triathlon under 2 hours, 30 minutes.  Just ANY triathlon wouldn’t do.  It had to be the Chicago Tri, because I knew there were even more challenges than just having a good race.  The heat and the other racers are out of your control.  It had to be the ‘same’ as my first year where I finished, barely, with a time of 3 hours 12 minutes.  I was miserable the whole way through.  From not having a wetsuit in 63 degree water, to having a pounding headache on the bike and puking not once, not twice, but three times on the run.  Although it was a miserable, the entire race through,  I knew I had accomplished something significant, and not only that, I was hooked.  I loved it – I don’t know why, especially becuase I had a terrible time, but the challenge and reward from completing something so difficult was second to none.  So, after my second attempt at the Chicago Triathlon, I was dreaming and going over the race in my head, I thought a sub 2:30 was attainable, but I didn’t realize it would take 4 more years to attain.  You see, it was my goal for the following year, but you know what? I didn’t do it.  I got close, 2:34:54.  The year after, even worse.  And last year, I didn’t race because I was injured and couldn’t run. 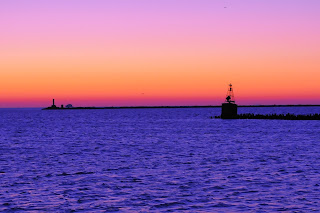 Which bring me to Aug 26, 2012.
I woke up at 3:45 to get to transition area as it opened.  And since the start was 3 miles from my house, I rode my triathlon bike, with all my gear, down Milwaukee Ave.  And as I saw plenty of people who were still enjoying their Saturday evening I was headed to Monroe Harbor to set up my transition area.  I had a mission.  I won’t bore you with all the training details, that I could go into excruciating detail about, but suffice it to say, that I was a man on a mission.  I get there before transition area opened and had to wait in line for 10 minutes.  As they opened the area, it was like shoppers waiting in line  to finally get into the store.  People, it seemed, were running around everywhere.  I found my wave rack and put my bike in position.
After everything was set up, I was leaving transition when I ran into my friend Eric (Landahl) and we chatted about the paths we would take to get to our bike after the swim.  We walked back to his bike to double check that no other triathlete squeezed and created a space in between him and his neighbors’ bikes.  And then did the same for mine also checking that I was in the correct gear to start riding in.  And that’s when I noticed something wasn’t right.  I said “oh my god, I can’t believe I just did that”.  Eric thought I was talking about my gear selection, and he said “looks fine to me.”  “No, look, my shoes are on the wrong pedal.  Glad I double checked.  That would have made for a painful bike.  After I switched my shoes, and everything was right in the world we walked out of transition. to wait.  I had over two hours to kill, so I did what I always do, sit on the steps just East of Buckingham Fountain to relax until my race, watching the sun rise.  There’s nothing quite like watching the sunrise, not thinking about anything important.  “This is the only thing that matters in my world for the next 4 hours.” 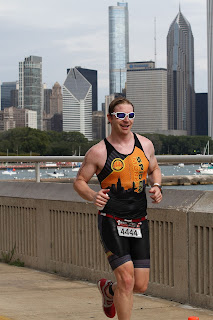 Two hours came and went like a breeze.  I was ready to race.  The wetsuit was on and I was in line for my wave – ready to finally race.  I was in the last wave of the 30-34 year olds.  I had never been this ready before.  Especially for the swim.  So I got in front for the start and I was off.  In years past, I would start in back and try to survive the swim, but not this year.  In years past I wouldn’t have been ready for the kicking and slapping that goes in a triathlon start, but not this year.  In years past I would notice all the nasty stuff at the bottom of the lake in Monroe Harbor, but, this year, I was racing and didn’t notice.  I was swimming and racing towards the swim out.  I, at least, felt like, was out in front and by the time I got the the 1/3 turn around only a few people passed me.  The turn back North, was a blur.  Stroke, stroke, breathe. Stroke, stroke, breathe.  Passing people in waves before me, and not noticing anybody passing me.  I get out of the water, dizzy, missed my first foot placement on the stairs and had the volunteers get me up out of the water.  Once on dry land, I heard some people cheering telling me that I had a sub 30 min swim – sub goal one, complete.  Next take off wetsuit before I run to transition where I had space and wouldn’t have to exert more energy than necessary.  I get to transition carrying my wetsuit.  Throw it on the ground, put on my sunglasses, then helmet, grab my bike and I’m off the bike out. 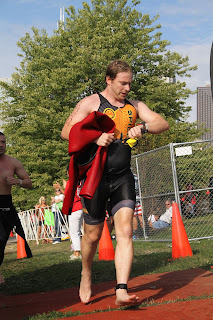 Running past the mount line, I leap on my bike and I’m pedaling on my shoes.  slip one foot in while I climbing the on ramp onto Lake Shore.  The next foot slides in just as I get onto LSD.  Big chain ring, head tucked, and hammering.  14 minutes some seconds later, I’m making the turn around back South.  Another 15 minutes go by and I’m heading back North for my second loop.  I don’t know, but I really wish I had one of those clicker things, the ones that people use at concerts or at bars use to help them count people, so I could count the number of people I passed.  I would love to know how many time’s i said “right side.”  15 minutes later I heading South for the final stretch.  The wind was strong and it was a strange cross wind coming from the South West blowing up massive amounts of dust from the softball Fields at Lincoln Park.  I would find out later, that after 1 hour and 48 seconds of starting my 40k bike, I’m entering into transition for the run. 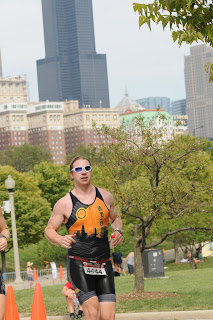 Rack bike, helmet off, running shoes on.  I head out on the run. at a 8:15 pace.  I wanted to build the run, start slower than my race pace and get faster as I get further along.  After my first mile I felt good, but my legs were tired but started to increase the pace anyway.  I got up to an 8:00 pace.  I was locked in for the next mile.  Hold this pace, 1 mile.  Mile 2 complete.  Mile 3 – “hold this pace and then start picking it up after you get through halfway through the run.  3rd mile done.  “Ok. now is the time. go faster, just a little”  My legs didn’t have it.  8:00 felt fine,  anything faster didn’t feel sustainable, I couldn’t hang on longer at that faster pace.  I was going as fast as my legs would carry me.   “Hold on to this pace.  stay the course.  Dig in. and hold it.” As I fought through the pain, I was keeping a steady pace.  I couldn’t go any faster, I was red-lining.  I was at my limit – not wanting to implode.  I finally checked my watch at mile 5 1/2, not having any idea of my time at this point.  My Garmin read 2:12 minutes.  Yes, I’m doing it.  Do exactly the same thing.  The last thing you want is to start walking.  Give yourself a chance to succeed.  Keep this pace.  Don’t speed up for fear of need to slow way down.  AND DON’T SLOW DOWN!”  I stayed the same pace.  I had a feeling I did well, but I didn’t know.  I crossed the finish line with my arm raised in the air – feeling like I had just won the race. 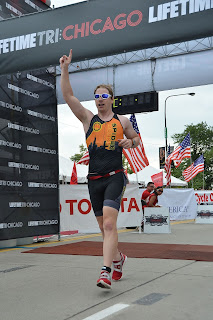 My cousin and his girlfriend were at the finish line, having the athlete tracker app, they showed me what they were watching for the past 2 hours…. It read:
Trent Williams: 2:24:04
30-34 age group: 10th place
Oh my god, I did it! Finally! I did it!  I couldn’t speak, maybe because of the lack of oxygen, maybe because I didn’t know what to way.  I was elated and delirious.  All I could do was smile because I just won the race – MY RACE.  My triathlons had always been a race against myself – and regardless the other athletes lining up at the same time, my triathlon races will always be a race of one.  A race where I can train and push myself to the max – where I don’t need or want to compare myself to anyone else.  I’m always competing against myself.  I am so grateful for hard work, dedication, goal setting and the simple gifts of being able to swim, BIKE, and run.  So like I said before,  this was 4 more than 4 years in the making and couldn’t have been happier with what I did.  I’ve learned sooo much in the process, but the biggest few things I’ve learned is that regardless of, what may seem like, monumental setbacks stick to whatever you’re doing.  If you want it bad enough, willing to put in the work, willing not to give up, you will succeed. 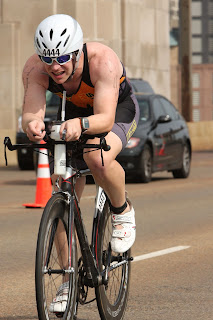