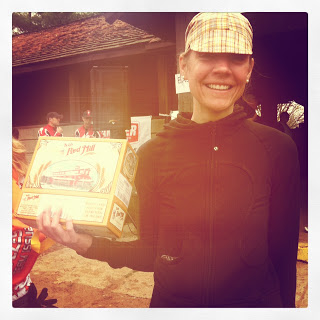 by Kristi Hanson:
Going into Barry Roubaix, I really had no expectations since we had just gotten off 5 days of pretty hard riding in Vegas. On the ride up, I was actually talking with Melissa (MK), my stellar travel buddy, about how I was a little worried my legs would not hold up and all I wanted to do was stay upright, put forth a hard effort, and see where I landed.

I will admit however, in the back of my mind, I knew this was the first real test for me after putting in some pretty grueling hours on the trainer over the winter. I was hoping it would play in my favor but tried not to think about it too much.

When we woke up my stomach was pretty shaky. My first thought was REALLY AGAIN on race day!! Just once I want to wake up and not have any issues. However the reality is, I think my nerves get the best of me and my stomach is not made of steel so I am just going to have to deal. Second thought was SWEET, I still have at least 2 hours for this to play out!!

We got to the park, checked in, and still had some time to kill so MK and I just hung out in the car for a while. Best thing about MK being my travel buddy as we laugh a lot over stupid things so being with her is the best distraction pre-race!! Also on a positive note, my stomach started to feel better so I knew we were heading in a good direction.

When 9am hit, it was go time. Got the bikes ready, hit up the porta, and went out for a warm up ride. I followed the course so I would know a little of what I was getting myself into. First 4 miles were pavement and then the gravel started. I have ridden gravel roads quite a bit up at my family’s cabin and on the trails in Minneapolis. However, this gravel way less matted down and so it was going to be critical to pick a good line (i.e., where the car tires usually ride) and do my best not to get scared on the descents.

During the warm up, I knew things were going to be better than expected. My legs felt unusually good and I was able to climb the hills like a champ.

People started lining up pretty early since like cross it was a mass start. Difference for this race is the waves were not by category. Instead they were by distance and age. Positive of this is you could really work with anyone on the course. I was in the third wave and unfortunately because of a necessary last minute porta stop I was pretty far in the back of the wave. I knew however, I had 4 miles of pavement to move myself up.

When our wave went off, I just continued to find holes to move up in the pack and before I knew it I was towards the front where I wanted to be. When we hit the gravel the front group was broken in two and I was in the second. Those boys were just way too fast for me especially with all the climbing that was happening. In addition, at this point we had started to catch the slower group of the wave before us so there was a lot of movement for position. I just kept telling myself breathe and be smart but aggressive. You deserve the good line just as much as the guys do!! Being in only girl’s races the last few years, I forget how aggressive boys can be :-).

The next big section where things got broken up was when we hit the double track; aka about a two mile long cyclocross course. For the most part I rode this entire section except for one little part that was just way too sandy. Thank goodness for all the cyclocross racing!! It was a big help and allowed me to make up quite a bit of time so much so that I was sort of by myself until the half way point.

At this point, I was feeling pretty beat up!! I actually thought about giving up and it was right at that moment that my Spidermonkey teammate, Sarah Rice, showed up. She was my first push of motivation. Sarah and I worked together for a good 5 or so miles. She would pull me on the flats and I would pull her up the hills. Our relationship works really well this way!! More importantly it allowed me just enough rest and company to get back in the game. Unfortunately, this teamwork came to an end when Sarah dropped her chain. She gave me one look and said “go, go” so I went. I grabbed a guy’s wheel in front of me and we rode on for another few miles together taking turns pulling and passing lots of people.

It was after these few miles that my second push of motivation came. There was a big pack of I am going to call the 40 year guy group with three women; Sandra from XXX, a girl on a fat bike (who was amazing), and a girl on a mountain bike. It was at this moment that I realized I was out front. I was really in this and had to push hard until the end. I grabbed onto this group and gave it everything I had to stay with them. Pushed up every climb and let my fears go on every descent!!! Only two of the girls stayed with us and we picked up another on the way. In addition, we had a very scary moment when we had to make a sharp left turn after a steep descent that was not well marked. I thought for sure I was going down or someone was going to run into me but we all made it through upright on two wheels. Talk about a group of bikers that knew how to handle their bikes. Pretty sweet!!

Everything was swimming along until we hit the second section of double track. Almost all of this section was not rideable so we all got off and ran. I did whatever I could to stay with the two girls not on the fat bike, yes she rode the entire thing, and I managed through the run but when we got back on our bikes their technical skills were just way better than mine. Pretty awesome actually!! In this section, I also took on large puddles for the first time in my life. I just trusted that the guy before me got through so I took the same line and had success as well. Fear overcome!!

At the end of the second technical section, it turned to pavement and stayed that way for the rest of the race. I was all alone again, but pushed as hard as I could because I knew the two girls were not too far in front of me. It was tough to keep pushing but then motivation push number 3 came. Yep, the 40 year old guy group showed up again and I grabbed on; held on for dear life until we got back. It was at about a mile out that one of the guys says to me “we must be towards the finish people are getting swirly”. I say back “Yep we are close”. He says “Are you getting in on this sprint?” and I say “what for? I am the only girl in the group. All I get is seconds. Not worth the risk.” He says “SMART”.

We all finish together and they congratulate me for hanging on with the OLD GUYS!! This was by far the HARDEST 36 miles I have ever ridden and the 40 year old guy group pushed me hard.

At the end, I knew the race had gone well but still was not entirely sure where I finished. I had to stop myself from thinking about it because the first goal was to spin out my legs and then get in warm clothes. This was interrupted however, when I saw Peter and decided a 312 was a better idea!! Thanks to Fred for bringing them along; it was the perfect post race beverage :-)

Once I got on warm clothes, we checked the race results and I was shocked that I pulled off a 5th place finish in my age group out of 35 and had beaten all of the girls in Chicago in my age group. Sarah was not far off in 7th and if it wasn’t for the chain issue, she probably would have taken me.

It was my first podium in a really long time and felt great!! I was pretty excited all the grueling trainer rides paid off.

The sweeter moment however, happened the day after the race when Katie and her accounting skills realized I was 9th overall out of 77 and 1st of all the girls from Chicago in the 36 miler!! Pretty awesome day and could not have been accomplished it without all of the support from my family, friends, and the Spidermonkeys. You guys rock!!

Some additional comments and/or words of wisdom:
Geoff P. – “I shouldn’t have made that left turn at Albuquerque” and “Nothing like riding 67mi for a 62mi race”

Hayes S. – “You know you’re bonking when you’re letting a pugsley take a pull on the pavement heading into the park”

Pete M. – What I learned: the importance of checking your tire pressure before you start warming up for a race.  My tagline: “Who the hell is Barry?”

Congratulations to everyone who raced!

Spidermonkey of the Week – Jesus Cruz