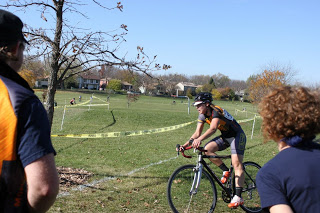 by Kelly Clarke
This past winter, in Kristen Meshberg’s Pedaling With A Purpose class, we went around the class and said our goals for this season aloud. After all, if you’re committing to these trainer classes twice a week through the frigid months, what is your purpose in doing so? My goals were:
– Do a track race
– Do a mountain bike race
– Get a top ten in a W4 CCC race

I didn’t want to sound greedy, but I was honestly hoping for more than one top ten finish in the CCC series. But who knew if that would even be feasible. Last season I was trying to get top 50% of the field, and it never happened.  But this year I was taking training more seriously, meaning I was thinking about it at all. And I was also focusing less on ‘skills’ and more on just having good fitness to maintain speed and focus in races.

Well, with the track and mountain bike season over, I can say I failed at both those goals. (But I’ll do them next year!) The consolations being that I did do a Monday night track clinic to get my feet wet at the Northbrook Velodrome (it was a GREAT experience), and I did conquer the three ravines at Palos on one of the Women’s Dirt Days, and I took my first trip to Kettle Moraine. The goal to get top ten in a CCC race came easy. In the first cup race, Jackson Park, I got 6th place! I decided to make it a goal to get a top ten in every CCC race this season.  This plan backfired at Dan Ryan, but no bother – top ten for each race was still a good focus to have.

Some time at the beginning of the season, Sarah Rice had said, “Why would you ever enter a race if you weren’t going to try and win it?” And this idea has been simmering with me since. I never enter a race expecting to win. I have my carrots that I want to beat and that’s been good enough to me, but how could I ever expect to win? These other women are just faster, better, more experienced…

Slowly I have been trying to change my thinking, and looking to my fellow female racers to watch the fire they have when racing which allows them to be successful. Kristen and Sarah have it down pat, but then even Stephanie, Kristi and Michelle in crits and road races, and my nemesis, Annette Stahelin, in cross. They have this drive that I sometimes lack to give extra effort at points in a race where everyone is hurting regardless, and they pick up extra spots or get positive results doing so. There’s a point in a race where I almost subconsciously decide to sit back and put forth that exact amount of effort, no more, because I want to finish the race or maybe I think that really is all I have to give. I’ve been trying to push those boundaries.

So, back to my nemesis, Annette. She races for Half Acre, but more importantly, we were best friends growing up. We got into cross at the same time, and I don’t like it when she beats me in races. But she trained like hell this year and she has been consistently beating me. At Carpentersville, she was just a little bit ahead of me in the final lap. I decided to dig in and give everything I had to catch her. So what if I get gassed before the finish line and don’t succeed? I just needed to go harder than I thought I could and hang on for as long as I could, and see where I ended up. It worked. I was able to pass her and get that one last spot at the end of the race. I was elated. Not even so much that I beat my friend (whom I love dearly), but I definitely gave more than I thought I had to give at the end of this race, and succeeded. Now that I saw what that felt like, I made it my goal that in the next race, I would need to make these pushes earlier and more often. Stand up and sprint when you think you’re too tired. See a carrot? Don’t wait to recover before catching them, just go. It’s only a thirty minute race; there is no time to recover.

I took that with me into the race at Sunrise Park. Push harder than you think you can, early and often. Around the first corner of the race I was in seventh place. I started picking people off until it was Ashley Korol and Tricia Renée Fleischer off the front (way off the front) then a train of me, Jen Groen, Nicole Falk, Annette and a few other girls. Three quarters through the first lap, Jen fell and dropped her chain, making it hard for the girls behind me to stick with me. I tried to get as much space in front of them as I could. I know from being on the other side of things, the larger the gap, the more daunting it is to bridge. And as we’ve established, this game is all mental. I could see Ashley and Tricia in front of me. Deep down, I didn’t think I had a chance in hell to catch them, but I told myself to focus on catching them, not on anything behind me. The race spread out and it was Ashley and Tricia, a gap, me, a gap, and then a group of women for most of the race. Towards the end, I could see Nicole Falk bridging the gap behind me. And the rest were not far behind. I knew they were better at the off-camber corners, but I could gain distance back in the strait-aways. I focused really hard on staying upright. When you’re going as hard as you can, it becomes easy to fall and make mistakes. I was able to hold on to third place through the end of the last lap. It was awesome. I was just telling Kristi before the race how all I wanted was a top 5. I had a few sixth place finishes, but couldn’t break into the top five. And now, I earned a spot on the podium. First time ever.

So my strategy was successful, but I still have a lot to learn. I was lucky to not fall in this race, but you fall a lot in cross, and I think that makes it really difficult to come back and keep going really hard. I saw Grace fall at WCA’s Grafton race last year and come back to get fourth. It takes a lot of fight when you lose all those spots to get them back. Also, I didn’t have to pass anyone once I got really tired, and I think that takes a lot of mental strength. It’s really easy to follow someone’s wheel when you’re really tired in a race, but you should be trying to pass them. Make them work to pass you.

I tried to make that 30 minute race completely serious and focused, but the rest of the day – cheering on my teammates and racing in the ridiculous 4B race was a blast. I love having Stewart race with me in the 4s, and seeing Kim and Kristi in the 1/2/3 race. Hayes was there all day and brought beer and the tent. PJ is always super competitive and supportive. Aaron always races his heart out. Lucas Seibel killed it in the Single Speed and the 4s. Kyle raced twice and had a hand-up incident for which he is awesome. Trent did great in the 3s race. Monko was probably hungover, but you’d never know it with his doubling up in the 3s and 1/2/3s. We have a really awesome cross contingent this year, and the ABD Sunrise Park race was no exception!