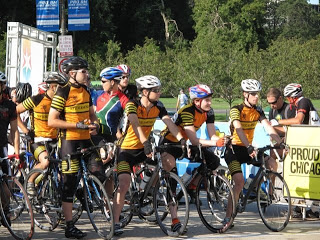 A Sunday in the City: Chicago Crit Cat 5b 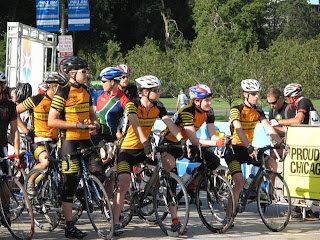 Sunday morning started early, an 810 am race start meant a 530 am wake up, not to much fun. The tough morning was the only down part of the day, the Chicago Crit was an excellent event. The Cat 5 Race Heat 2 was full of Spidermonkeys, a total of 6, and we were going to make our presence known. We were the first guys on the start line which made getting to the front on the start pretty easy. To start the race off I clipped in effectively, something that doesn’t always happen. From the start Todd went to the front, Bryan Witry, John Castro and I joined up towards the front, the 4 of us stayed in the top 10 for the first 5 laps, there was a guy from Pegasus who helped set the tempo as well. I was on the front for about half a lap, and the field was under control, with the wicked tempo being laid out by Todd there were not a lot of attacks, and the few that did happen were pulled back quick.
The team did a great job of staying together, and since we all decided to try to help Bryan, my job was to stay around Bryan and keep him near the front. Occasionally I would go to the front and set some tempo with Todd. It was a fun job and I was happy to be able to stay at the front of a race group, I usually dangle at the start of each race, that was the case in the Chicago Crit. By staying up front the team saved a ton of energy, up in the front we didn’t have to chase out of the corners. Not to mention I heard the announcer say “spidermonkeys” a lot, usually a sign that the team is having a good race, and dean even went on stage to predict the winners.
On the third to last lap I almost got slammed into the cage on the inside of turn 3, I think I tried to take a little too tight, I avoided the wheel in front of me and made it through keeping the rubber side down, it was pretty close.
The next two laps passed quick and I regained my position in the pack, coming into the last lap the team went to the front, we came up on the right and started to assemble our lead train, just the way we planned. Castro took us down the front stretch and through the first turn, it was a blistering pace, I had to work pretty hard just to hang on, Todd came over Castro at the first short up hill, I sat second wheel and Bryan sat third wheel, the lead out train was in tact going into the back stretch. Half way down the back stretch I came over Todd to try to up the tempo once again. I was suppose to wait to attack until the hill, but I felt I needed to start it earlier to string out the large pack behind me. I pulled as hard as I could through the third turn on to the back hill. As I watched the pack go up the hill I got out of my saddle and gave it everything I had to try to hold onto the group, I was successful enough to grab mid pack position. Todd gave Bryan a lead out as I watched from mid pack, I passed two guys out of turn four and one or two more on the way to the finish line to grab 20th. Not terrible, but when you sit at the front for the whole race it kind of sucks to finish mid pack. But we got a top five and we represented spidermonkeys well. I was really proud of our team effort! I really enjoyed racing with the Cat 5 team on Sunday, thanks guys. Now its time to upgrade and start the whole process over again, Elk Grove starts my 4’s career next weekend.
Great day in general for the spidermonkeys!

Things I Did Well:
1) Raced at the front of the pack
2) Made a move to try to spring bryan for the sprint

Things I need to work on:
1) Sprinting
2) Timing my move better